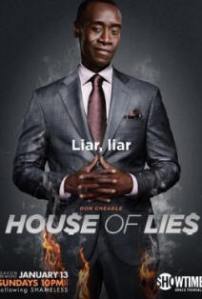 House of lies is about Marty Kaan, played by Don Cheadle, who now leads his own consultant firm.  Marty is cut-throat and clever and will stop at nothing to get a high paying client.  His team, formulated from his former company worships his antics and will stop at nothing to get the job done.  It’s all about the money.  The team consists of Marty, Genie (Kristen Bell), Clyde (Ben Schwartz) and Doug (Josh Lawson).  Marty has an estranged wife, Monica (Dawn Olivieri) who’s not so estranged, a wanna be gay son, Roscoe (Donis Leonard Jr.) and a semi-quasi dying father, Jeremiah (Glynn Turman).  Marty has more sex than a hooker and strikes up more meaningless relationships than “The Bachelor”.  To complicate matters, Marty and Genie managed to sleep together and are now so uncomfortable around each other they can barely be civil.   The fast talking, cleaver team is something to watch.  Marty is a legend and together with his team are unstoppable.  This series  is aired on Showtime and is only 30 minutes an episode.