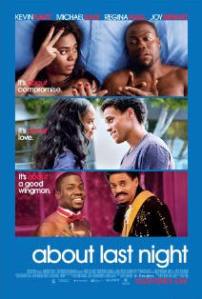 My past experiences with Kevin Hart movies and comedy spots left me feeling that Kevin Hart wasn’t very funny, despite the “funniest Man Alive” title placed on his name.  I don’t like comedians who cannot do their routines without creating the dirtiest, foul material available.  Today I saw “About Last Night” and suddenly saw the humor.  Kevin along with Michael Ealy was totally funny in this cutesy, “I don’t want to commit to a relationship” movie.   Although there was plenty of foul language, it wasn’t over the top.  After all, this is an adult movie.  Paula Patton makes a cameo but profound appearance.  I believe the plot was pretty true to life.  There were a few bloopers that I cannot reveal because it would be a spoiler.  All the women in this film were eye candy.  Kevin and Regina Hall became a wild, eccentric couple while Michael Ealy and Joy Bryant, better known for her role as Jasmine Trussell on Parenthood, teamed up as a “normal” couple, looking for love.  Watching the two couples come together was hilarious and quite entertaining.  I recommend seeing About Last Night, especially if you need a pick me up.