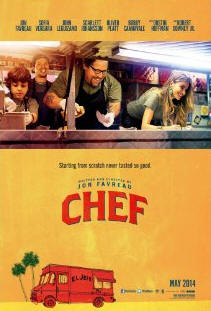 Chef is a feel good comedy with lots of stars contributing.  I especially liked all the displays of delicious food.   Jon Favreau, who also wrote and directed this movie, plays Carl Casper a divorced chef working for a controlling restaurant owner named Riva, played by Dustin Huffman.  Martin (John Leguizamo) and Tony (Bobby Cannavale)  play Carl’s sous-chefs.  When Carl and Riva can’t agree on an appropriate menu for Ramsey Michel, the food critic played by Oliver Platt, he quits and goes in search of his destiny.  Carl has a technically savvy young son named Percy played by Emjay Anthony who was instrumental in helping Carl get recognition and get on his feet.  Carl also has an x wife named Inez played by Sofia Vagara.  Inez solicits her other X husband Marvin, played by Robert Downing Jr. to help out by giving Carl an old food truck.  The dynamics are very interesting and the movie was well done (no pun intended).  Scarlett Johansson plays molly the restaurant hostess who always has Carl’s back.  While Chef is very good, I would wait for the DVD since there’s nothing happening that rates the cost of a movie ticket or the big screen.