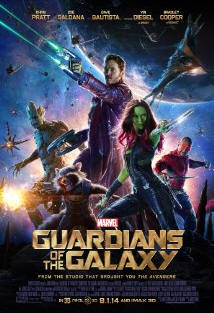 I expected Guardians of the Galaxy to be an annoyingly bad movie.  I started hearing rumors that it was pretty good so I looked up it’s ratings and found the rumors to be true, according to thousands who bothered to rate it.  Each character brought significant abilities to the table and was brilliantly played by Zoe Saldana (Gamora), Chris Pratt (Peter Quill/Starlord), Vin Diesel as the voice of Groot, David Bautista (Drax), Bradley Cooper as the voice of Rocket, Lee Pace (Ronan), Djimon Haunsou (Karath), Glen Close (Nova Prime) and Benicio Del Toro (The Collector).  Guardians of the Galaxy focused on how they became a team and even, how they got their name.  The special effects were outstanding.  The plot involved the team trying to keep the evil Ronan from obtaining the “orb” that would give him the power to destroy any planet in the galaxy.  There were a few corny scenes, but for the most part, the movie was good.  I didn’t see the greatness that many others saw, but I do give it more than a passing grade.  I thought the movie was a combination of Star Wars and Star Trek.  The sound track allowed us baby boomers to go back in time and enjoy some of the better music of our era.  There were lots of action and lots of humor.  I found myself really laughing out loud.  This is a surprisingly descent movie worth seeing on the big screne.  Check it out, IMDB has listed Guardians of the Galaxy a rating of 8.7.