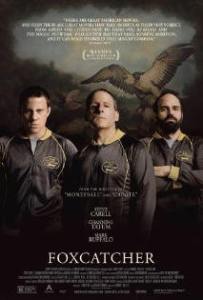 Weird is as weird does and Foxcatcher is weird.  The tone is set so dark that it was hard to know what happy was.  Foxcatcher which is based on a true story has emerged as an Oscar contender.   I’m not very familiar with the sport of wrestling however after seeing Foxcatcher, I realized it was not really about wrestling but about the pressures of life and the impression most of us would like to leave on our parents.  Steve Carell brilliantly plays the wealthy John DuPont who has a passion for wrestling.  His desire to own a team that would take home the gold during the 1988 Olympics, brought him to a relationship with Mark and Dave Schultz played by Channing Tatum and Mark Ruffalo, respectively.  Both are world renowned for their wrestling talents and had already won gold for the 1984 Olympics.  The acting was fantastic as this was Steve Carell’s first serious actor endeavor which awarded him a Best Actor nomination.  Vanessa Redgrave played Jean DuPont, mother to John.  With a cast like this, you can’t go wrong.  Kudos to Foxcatcher’s director, Bennett Miller, who must have had some difficultly keeping this movie as strange as it is.  The twist is even stranger and if you don’t know the story, you will never see it coming.  Foxcatcher held my interest and was enlightening.