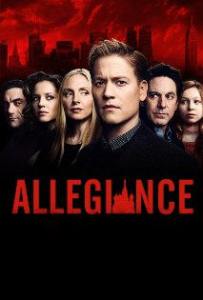 There are several series out that deal with national and international affairs but there are none that deal on the level of Allegiance.  A couple, Katya (Hope Davis) and Mark O’Connor (Scott Cohen) are retired Russian spies or as the pilot suggest, current sleeper cells.  The O’Connor’s have 3 children, Natalie (Margarita Levieva),  Alex (Gavin Stenhouse) and Sarah (Alexandra Peters).  Sarah is also a Russian Sleeper Cell but her brother, Alex is a gifted CIA analyst who is assigned to a joint FBI/CIA investigation into a SVR plot to destroy critical infrastructure within the United States.  Their younger sister, Sarah, has no clue as to the whole spy endeavor.  Alex also has no clue about his sister, Natalie, or his parents true lifestyle.  In fact Katya is the only family member originally from Russia.  She recruited her husband and daughter.  Katya and her husband have no desire to spy or carry out any Russian task but are being threatened by the SVR ( Sluzhba Vneshnei Razvedki (Russian Foreign Intelligence Service; post cold war intelligence service).  As an alternative to recruiting their son, Alex, who is “unrecruitable”, the O’Connors have agreed to spy on their son, giving the SVR access and information that will keep them several steps ahead of the FBI and CIA during their investigations regarding their (Russia’s) plot against the US.  Allegiance is very well written and very informative.  I find the series intelligent, entertaining and suspenseful.  I think it’s going to be around for a while.  Allegiance airs on NBC — check it out!

Obviously, I really liked this series, however, I just found out it’s been cancelled after 5 episodes.