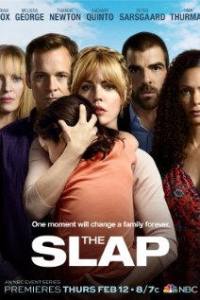 The Slap has an impressive cast but doesn’t appear to have the potential for a long story line.  In fact, it’s an American mini series, based on an Australian adaptation of the same name.  So far, only the pilot has aired so there’s not a whole lot to report on, regarding the quality of the series.  I found some parts of this story quite repulsive.  An unruly 5 year old brat at a family, birthday barbeque is pulling up the hostess’s garden, destroying classic vinyl records, refusing to acknowledge he’s been called out after the 3rd strike in a softball game and the worst of all, being breast fed by his mom Rosie (Melissa George) every time he gets out of order.  Hugo’s father, Gary (Thomas Sadoski) observes but does nothing.  The slap was caused when Hugo repeatedly kicked an adult, Harry (Zachary Quinto) in the shins because Harry was trying to discipline Hugo as he swung a bat at the other children.  I must say, the whole scene brought up plenty emotions.  It’s hard to sit there and not have any input however, it’s only a TV series.  In the meanwhile, the star couple, 39 year old Hector Apostolou (Peter Sarsgaard) and Aisha Apostolou (Thandie Newton) are having a 40th birthday for Hector and Hector is obsessing over his under aged children’s baby sitter, Connie (Makenzie Leigh).  In pops Anouk (Uma Thurman), with a very young date and observes Hector having a private moment with Connie.  There’s lots going on in this series, including the fact that Harry is a cocky hot head.  I have mixed feelings about The Slap — I hope it’s gets better because other than the slap, I found it a tad boring with a lot of the same old scenarios, like Hector’s mid life crisis.  Dylan Schombing brilliantly plays Hugo, the 5 year old, undisciplined child.  The Slap airs on NBC and is a tolerable mini series that will run for 8 episodes.