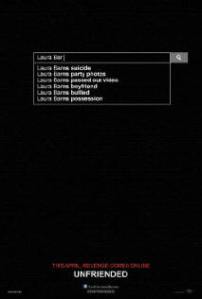 Unfriended is unique!  A movie based totally on a chat screen with approximately 5 friends, better known as cyberspace.  The movie is 1 hour and 22 minutes long.  During that time, all we saw was typed conversation between these friends and a former friend who committed suicide several months ago.  All scenes are controlled by the dead girl via Skye and Facebook. I consider this a horror movie, which I am not a fan of.  I maintain, if you take away the sound from a horror movie, it falls apart.  Unfriended was actually a little different.  While sound played a big part, so did many other things, like the dialogue and the character of these friends.  The movie was suspenseful and different enough to make it better than the average horror flick.  It falls apart for me because dead people can’t type or control computers or chat rooms.  Dead is dead!  If the death of this person were questionable, I could have jumped on board but I can’t get behind a dead person doing anything. Too bad because otherwise, this movie was brilliant.  It was more about principle and cyber-bullying instead of scare tactics.  It’s almost impossible to critique this movie without spoilers, so I’ll leave it at this:  if you don’t mind putting aside the obvious, go for it, but wait for the DVD.  I saw it because it was my grandson’s birthday and this is what he wanted to see.  Lucky me!