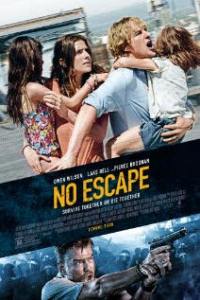 I haven’t been this excited about a movie since 2015 began.  I’ve seen thousands of movies but never one like this.  No Escape is a thriller like none other.  Owen Wilson who usually plays a comedic role, gave the character of Jack Dwyer a decent portrayal as a husband to Annie Dwyer (Lake Bell) and father of two little girls, Lucy and Breeze Dwyer.  The movie opens with the Dwyer family flying from Texas to Southwest Asia where Jack is starting a new position heading up his water manufacturing company as an engineer.  While at the airport, the family befriended a man they met on the plane, Hammond (Pierce Brosnan) who, along with his side kick, gave them a lift to the hotel because their ride never showed.  From the moment they arrive, nothing is working.  No internet, no TV, no telephone service, no messages from the company and noticeable traffic missing in the streets among other things.  Disappointed and apprehensive, they called it a night with hopes of a better day in the morning.  The next day when the hotel was unable to provide a newspaper, Jack had to walk a block or so to buy one from a local vendor.  On the way back, all hell broke loose when a violent, bloody coup erupted.  Unbeknownst to anyone, the Prime Minister had been assassinated earlier, then without regards for anyone else, the rebels went after everyone who wasn’t a member of the coup, especially Americans.  The killings were ruthless and the scenes were so intense, I felt as if I was there.  The situation was so hopeless, I didn’t see any way out.  The worse part was the language barrier and the lack of information.  Why was this happening and when was it going to end?  Some of the scenes involved tactics that had me crying and softly repeating “OMG” over and over.  I found it hard to get hold of myself.  I am not usually this emotional but I couldn’t contain myself.  I felt helpless and frightened, something I’ve never experienced at any movie.  Intense is an understatement.  I couldn’t understand why these rebels were so savagely cruel.  No Escape was directed and co written by John Erick Dowdle  and Drew Dowdle (known for writing horror movies) who took us on a definite thrill ride you won’t want to miss.