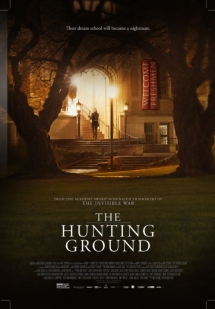 Since this is a documentary, I don’t really think it needs rating.  However, I have to present this as an alleged account of sexual assaults as presented by the makers/writers of this film.  The Hunting Ground tells the blatant truth about RAPE on campus and how it’s ignored.  An edited version of The Hunting Ground aired on CNN, November 22, 2015 before it was released in December.  This film starts out showing the excitement of several young girls and their families when they found out they were accepted in various colleges, which included the likes of Harvard, Berkley, University of North Carolina at Chapel Hill, Amherst College, and Notre Dame.  It didn’t take more than a couple of weeks before many of these girls lives were changed forever.  Apparently, rape is a huge problem for colleges today and ignoring complaints is the way it’s dealt with.  The film implies that many college officials were more concerned with minimizing rape statistics for their universities than with the welfare of the students, thus the message told over and over is that the college has to be protected, not the student.  Other students, college administrators and city officials are accused of contributing more problems for students who try to aggressively pursue their claims.   “The Hunting Ground also includes testimony from male victims of sexual assault. Producer Amy Ziering stated the filmmakers “felt it was important to show men and women. For men it’s often harder to speak up because there is a social stigma associated with rape. Many male victims were feeling ashamed.”

“A section of the film is focused on Jameis Winston, the former star quarterback for the Florida State Seminoles football team (now with the Tampa Bay Buccaneers), and the accusation of sexual assault against him while at Florida State. His accuser, Erica Kinsman, publicly discusses the incident for the first time.”

“The narrative of The Hunting Ground is structured around the story of Andrea Pino and Annie Clark.   Pino and Clark, rape victims and students at the University of North Carolina, became campus anti-rape activists, filed a Title IX complaint against The University of North Carolina on January 16, 2013 (along with three other students) and co-founded the group End Rape on Campus.”

Senator Kirsten Gillibrand (D-NY) makes a brief appearance in the film.  The Hunting Ground is on DVD and in my opinion is worth seeing, especially if you have a child that’s about to attend college.  There much, much more to this film — judge for yourself.  BTW:  Lady Gaga wrote the song (“til it happens to you”) for this film.

[THE HUNTING GROUND is nominated for Original Song]

This entry was posted in Documentary, DVD MOVIE REVIEWS, HUMAN INTEREST, STREAMING and tagged Documentary, lady gaga, the hunging ground, til it happens to you. Bookmark the permalink.