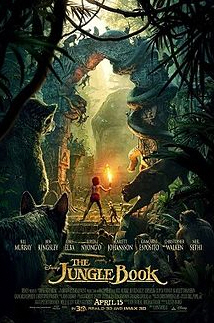 Disney has done it again. What a brilliant movie about a young boy, Mowgli, (Neel Sethi) forced to grow up in the jungle, raised by animals who view him as their own. When Mowgli’s human family was killed, he was saved by a panther called Bagheera (Ben Kingsley) and given to a pack of wolves to be raise. The mother of the pack, Rakasha (Lupita  Nyong’o) and their Leader, Akela (Giancario Esposito) taught Mowgli to be fast and efficient but would always remind him that he was human, not a wolf or any other animal, thereby having limitations with regards to the animals he ran with.  However, Mowgli was referred to as “the Man Cub” throughout the animal kingdom.  Mowgli was loved and protected by all except the most feared animal by all the others in their region of the jungle, a Bengal tiger called Shere Khan (Idris Elba).  When Mowgli was a baby, Shere Khan was scarred by the “red flower” (wild fire) as he attacked and killed Mowgli’s village including his father (Ritesh Rajan).  Bitter and angry about his scars, the tiger took to threatening the animals in the village where Mowgli lived, every chance he got.  After realizing Shere Khan was not going to leave the animals in peace, Mowgli decides it’s best to leave the pack.  After much thought, Bagheera the panther, agrees and decides to take Mowgli to the “Man Village”, where he would be protected and safe.  While in route, Shere Khan ambushes them and injures Bagheera, but Mowgli manages to escape, thanks to a herd of water buffalo.  Bagheera and Mowgli were separated during the struggle.  Mowgli looked for the panther but moves on when he doesn’t find Bagheera.  Next Mowgli encounters Kaa, an Indian Paython (Scarlett Johansson) who captivates him, placing him under her spell where he learns about his village and how he came to live with the animals.  While under her spell, Kaa tries to devour him but his life is saved by Baloo a sloth bear (Bill Murray) who befriends Mowgli.  From this point on, things get pretty adventurous.  Mowgli and Baloo’s new relationship allows Mowgli to perform human tricks that Bagheera and the rest of the animals always reprimanded him for using.  Being on his own, Mowgli was now left to fend for himself.   There is lots more trouble on the way as Mowgli is kidnapped and turned over to King Louie (Christopher Walken).

These animals were so life like, I kept wondering if they were actually real.  I found out that Disney used green screens and an advanced CGI to create these lifelike animals, which was only the tip of the iceberg.  The Jungle Book was shot entirely on a sound stage in downtown Los Angeles.  The technology combined a sort of hybrid “Avatar” and “Who Framed Roger Rabbit” (one Human surrounded by animated creatures).  In case you didn’t know, the tiger in “Life of Pi” was not real, but created using CGI.  Oscar winning Visual Effects Director, Rob Legato, who also oversaw “Avatar”, created a new standard for realistic CGI.  During the filming of The Jungle Book, Humans mimicked animals for Neel (who plays Mowgli) to talk to, this allowed an eye-line between Neel and the animals to be created.  The only time real animals were used was when puppies were brought in to give Neel an opportunity to cuddle and play with them.  The puppies would be replaced with the CGI wolves that were the same size.  Software such as Pixar’s Renderman, was used for shading and lighting.  MPC was used to allow more ray tracing, which is very expensive because it takes an enormous amount of computational power to figure out every pixel of light.  Peter Jackson’s WETA was used on scenes with King Louie, the gigantic ape.  Between surrounding grass and the hair on just 5 to 15 animals, you’re talking a tremendous amount of computing power.  While the software and technology developed and used to make these remarkable films are expensive, powerful and require passion and knowledge beyond the norm, the end results are absolutely astonishing.

The Jungle Book is an old family story for children and it’s very well told.  It has a profound message for all.  We live in a wonderful time of technology and can take advantage of all life has to offer on modernizing motion pictures like The Jungle Book.  It’s worth seeing what we’re able to do these days and escaping some of the horrific news of the day through the hard work and clever creations of the “Big Screen” productions like “The Jungle Book”.  I highly recommend seeing this one — it’s a real work of art!