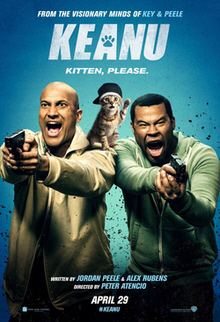 I thought Keanu was going to be one of those silly, slap stick comedies with two guys I had never heard of until recently.  I’m happy to report Keanu wasn’t that bad and even had quite a few very funny moments.  This comedy is about two nerdy cousins who go beyond the call of duty to recover a kitten.   Keegan Michael-Key plays Clarence Goobrie, Smoke Dresden and Shark Tank while his cousin Jordan Peele plays Rell Williams, Oil Dresden, and Tectonic. Clarence is married to very sexy young lady named Hannah (Mia Long) and has a daughter.  Rell, who is sort of a weed head, just broke up with his girlfriend and lost his job.  Rell’s weed supplier Hulka (Will Forte) lives next door and supplies endless information throughout the movie.  The plot is a little convoluted as the two men get together thinking that Clarence is going to cheer up the down and out Rell.  However, before Clarence arrives at Rell’s apartment, the most adorable kitten you’ve ever laid your eyes on comes scratching at his door.  When Rell opens the door and lays eyes on the kitten, he instantly cheers up, names the kitten Keanu and completely falls in love with him.  When Clarence arrives, Rell is chipper and introduces Keanu to him with a full heart.  So where did this adorable kitten come from in the first place?  That is the opening of this movie, which will explain the names Smoke and Oil Dresden and the Kitten.  As time moves on, Keanu is stolen, and Clarence and Rell have to go undercover to get him back.  They end up posing as “The Allentown Boys”, who are responsible for a big drug robbery and massacre earlier in the week.  Teamed up with a dangerous gang banging crew under the names Shark Tank and Tectonic, they befriend Hi-C (Tiffany Haddish), Cheddar (Method Man), Trunk (Darrell Britt-Gibson), Bud (Jason Michell) and Stitches (Jamar Malachi Neighbors) in order to convince Cheddar, who now possesses Keanu, that he should turn the kitten over to them.  Apparently, everyone who comes in contact with the kitten, falls head over heels in love with it and will do anything to keep it.  The movie has some very funny scenes and is so different, you won’t see what’s coming.  I enjoyed it as I was pleasantly surprised.  Luis Guzman played a cartel boss near the end of the movie that was really one of the biggest twist of all.  There are lots and lots of crazy in Keanu!  BTW:  Keanu Reeves is the voice of Keanu, the kitten.