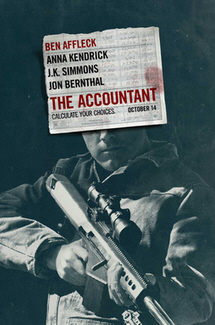 The Accountant is an extraordinary thriller, about a very high functioning Autistic child, Christian “Chris” Wolff (Ben Affleck) who is also a mathematical genius.  Chris grows up and becomes a forensic accountant, tracking insider financial deceptions for numerous criminal enterprises brokered to him by a mysterious figure known as “The Voice”, contacting him only by phone.  There are many surprises in this movie and the excitement never ends. I was on the edge of my seat most of the time. I don’t believe there’s anything predictable about this film.  Much care and research had to go into the making of The Accountant.  Watching how Chris compensates for his mental deficiencies to make himself more concise and better able to do what’s necessary to get the job done is nothing short of remarkable.  I was quite impressed with the movie.

As a child, Chris’ parents (Robert C. Treveile and Mary Kraft) took him to the Harbor Neuroscience Institute in New Hampshire, where he was diagnosed with autism and offered residency there. Although Chris bonded with Justine (Alison Wright), the mute daughter of the institute’s director (Jason Davis), his father, a decorated military officer, declined the offer, believing that Chris should overcome the hardships inherent to his condition rather than expect the world to accommodate to them. The pressure of raising a special needs child drove Chris’ mother to abandon him and his younger brother, Braxton (Jake Presley) who were left in their father’s care.

As an adult, Chris is being pursued by Raymond “Ray” King (J.K. Simmons), the director of financial crimes of the Treasury Department, who knows Chris by the alias “The Accountant”. King recruits an analyst, Marybeth Medina (Cynthia Addai-Robinson) to help him identify and arrest the Accountant before his upcoming retirement.  In the meanwhile, Chris is off on a new assignment where he meets Dana Cummings (Anna Kendrick) a young CPA, who has found an accounting mistake in her company’s books.  CEO, Lamar Blackburn (John Lithgow) and his sister and associate Rita Blackburn (Jean Smart) hire Chris to collaborate Dana’s findings.  Because of what Chris and Dana find, they are targeted for assassination — and so the adventure really gets started.  They are ruthlessly pursued by a hit man (Jon Bernthal).  I consider The Accountant a much see thriller that will keep you guessing right to the twisted end.