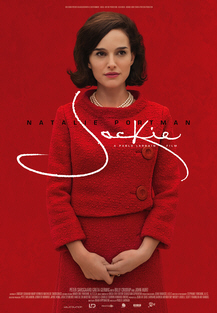 Jackie is as good as a film about Jackie Kennedy could possibly be, given it only covers the assassination of her husband and Theodore H. White’s (Billy Crudup) Life magazine interview with Jackie as a widow at Hyannis Port, Massachusetts.  Maybe because I lived those days of profound sadness and anger, I didn’t want to ever relive that time again.  It was one day before my birthday, 11/22/63, which ruined it for me, since I absolutely loved John F. Kennedy.  The world seemed to come to a screeching halt, absent of life and any form of happiness, just filled with sadness, tears and disbelief.

Jackie, the wife of John F. Kennedy and mother of Caroline and John, Jr. was sitting next to her husband when his brains were shattered by an assassin’s bullet.  Splattered with blood all over her pink suit, face and hands, Jackie tried to keep John’s brains inside his head while the secret service and other officials arranged proper transportation for JFK to the nearest hospital.  “Jackie” tells the events from the time Kennedy was shot to a time shortly after the funeral when Jackie sat down with Mr. White to be interviewed.  While the film made it hard to relive that horrible time, it was painfully difficult to sit through every thought Jackie had in her head.  Brilliantly acted by Natalie Portman, we learned that Jackie Kennedy had many issues of her own.  There’s not much to tell of this movie because it strictly deals with Jackie, Camelot and Bobby F. Kennedy (Peter Sarsgaard) during the immediate aftermath of Kennedy’s death.  President Kennedy was painted as an excellent president, nothing more and nothing less.  If you’d like to learn how Jackie felt at that time, rent the DVD.  Jackie is informative, if nothing else!