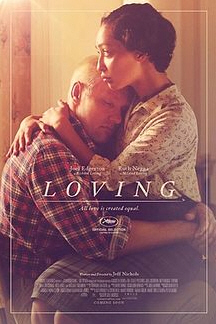 Loving is the true story of Richard Loving (Joel Edgerton), a white construction worker in Caroline County, Virginia and Mildred Jeter (Ruth Negga), a neighbor and family friend.  Mildred and Richard were in love, in 1958 Mildred became pregnant so they decided to get married.  The only problem was their marriage would violate Virginia’s anti-miscegenation laws so they traveled out of state to Washington DC, where interracial marriage was not a problem and became Mr. and Mrs. Richard Loving, then returned to Virginia as husband and wife.

One night while the Lovings were asleep, the sheriff’s deputies walked into Mildred’s home and arrested them.  They were forced to plead guilty to breaking the anti-miscegenation law.  As a result, they would have to leave Virginia and not return together for 25 years or go to prison.  Upset and disillusioned, they went back to Washington DC and stayed with a friend but Mildred wanted to have her baby in Virginia, delivered by Richard’s mother, Lola Loving (Sharon Blackwood) who was a midwife.  The couple secretly returned to Virginia where Mildred gave birth to their first child, Sidney.  Soon after their baby was born, sheriff’s deputies somehow got wind of the Lovings return to Virginia and rearrested them.  All set to go to prison, their lawyer steps up and says he erroneously advised them they could return to Virginia give birth to their baby.  The judge allowed them this last chance to leave for good, again avoiding prison.  Richard and Mildred moved back to Washington DC with their new son, Sidney for good.  After almost 10 years and 2 more children, Donald and Peggy, Mildred ends up contacting Attorney General Robert F. Kennedy, who refers them to the American Civil Liberties Union.  Lawyer Bernard S. Cohen (Nick Kroll) takes the case and confers with constitutional law expert Phil Hirschkop (Jon Bass).  A plan is put into motion and ultimately the case goes all the way to the Supreme Court.

A lot of effort went into the making of Loving.  The casting was superb, the acting was brilliant and the look and feel of that era was spot on.  I really enjoyed the movie despite the subject matter.  Life Magazine featured an article on the Loving family in 1966 which you can easily Google to see many pictures of Richard and Mildred Loving.  I have added one of the pictures from the Life Magazine spread.  Loving is available on DVD and Blu-Ray.  I highly recommend you check it out.

[LOVING is nominated for Best Actress]