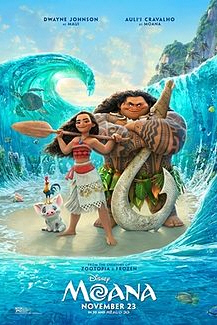 Animated movies today are so graphic with such great stories, I am finally a fan. Moana was fun to watch and had a great message for all. From a baby, Moana knew she was special with a calling from the sea, which was forbidden beyond the reef. As Moana grew up, the beautiful, paradise island she and her people lived on was becoming uninhabitable.

A small pounamu stone that is the mystical heart of the island goddess Te Fiti is stolen by the demigod Maui (Dwayne Johnson), who was planning to give it to humanity as a gift. As Maui makes his escape, he is attacked by the lava demon Te Kā, causing the heart of Te Fiti as well as his power-granting magical fish hook to be lost in the ocean.

A millennium later, young Moana Waialiki (Auli’i Cravalho), daughter and heir of the chief on the small Polynesian island of Motunui, is chosen by the ocean to receive the heart, but drops it when her father, Chief Tui (Temuera Morrison), comes to get her. He insists the island provides everything the villagers need. Years later, fish become scarce and the island’s vegetation begins dying. Moana proposes going beyond the reef to find more fish. Tui rejects her request, as sailing past the reef is forbidden.

Moana’s grandmother, Tala (Rachel House), shows Moana a secret cave behind a waterfall, where she discovers her ancestors were voyagers, sailing and discovering new islands across the world. Tala explains that they stopped voyaging because Maui stole the heart of Te Fiti, causing Te Kā and monsters to appear in the ocean. Tala then reveals that Te Kā’s darkness has been spreading from island to island, slowly killing them. Tala gives Moana the heart of Te Fiti, which she has kept safe for her granddaughter.  Tala falls ill and with her dying breaths tells Moana to set sail. Moana and her pet rooster, Heihei depart in a drua to find Maui.

Their journey becomes magical and exciting.  Moana is assisted by the ocean as she does all that she can to encourage Maui to replace the heart of Te Fiti and restore the islands to their former beauty and usefulness.  You’ll have to see the movie to see what happens.  The graphics are fantastic, the story is well written and the music will make you want to sing or at lease, turn up the volume.  I urge everyone to go and see this movie, it’s a real feel good film.