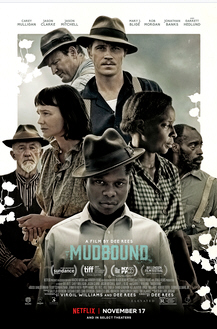 Mudbound is an American period drama directed by Dee Rees and written by Rees and Virgil Williams, based on the novel of the same name by Hillary Jordan. Mudbound is a Netflix Original production. The film depicts two World War II veterans – one white, one black – who return to rural Mississippi each to address racism and PTSD in his own way. I never really wanted to see this movie because it just stirs up painful issues of yesterday, which I’ve seen enough of.  However, I found Mudbound different from what I’m use to seeing — all history albeit redundant is significant, so I watched it, especially because Mudbound is Oscar nominated.

Henry McAllan (Jason Clarke) and his brother Jamie (Garrett Hedlund) struggle to bury their recently deceased father, Pappy (Jonathan Banks) during a rainstorm. When the coffin proves too heavy for the two of them, Henry flags the passing Jackson family for help, despite the obvious tension shared by both families.

The film then flashes back to 1939, when Henry buys a farm outside the fictional town of Marietta, Mississippi, in the Mississippi Delta, and moves there with his wife Laura (Carey Mulligan), with whom he shares a passionless marriage,  their daughters and his racist father, Pappy. The Jackson family, led by tenant farmer Hap (Rob Morgan) and his wife Florence (Mary J. Blige), work the farm’s cotton fields and dream of owning their own block of land one day. As World War II begins, Jamie commissions to become an Army bomber pilot while the eldest Jackson boy, Ronsel (Jason Mitchell), enlists in the Infantry and commands a tank. While serving in Europe, Ronsel strikes up a romance with a white woman and enjoys relative freedom from racism.

Both families suffer the threat of poverty when the Jacksons’ mule has to be put down and Hap breaks his leg. Florence, who worked for the McAllans as a housekeeper, has to give up the job to help cover Hap’s work, and an unsympathetic Henry forces Hap to rent the McAllan’s mule, cutting his wages in half. Laura takes pity on the family and pays for Hap’s doctor.

When the war is won, both Ronsel and Jamie return home. The handsome and charming Jamie rekindles his attraction to Laura, but suffers from alcoholism, PTSD and the scorn of his father, who disparages air force bombing as “easy and anonymous killing”.  Ronsel, on the other hand, is defiant when Pappy demands that he use the back door of a general store instead of the front door, because he is black. Henry warns Hap and Florence that Ronsel’s fiery streak could provoke problems for all involved if he does not keep it to himself, and Ronsel is forced to apologize.

As usual, I will stop here to avoid spoiling the rest of the movie.  I thought Mudbound was interesting and had significant history.  As hard as racial movies are to watch, it’s important to know what happened.   This story has much more to offer so I recommend you take the time to watch it.  Mudbound is streaming on Netflix and is also available on DVD and Blu-ray.  Check it out.

NOTE: Rachel Morrison is the first woman ever nominated in the category of cinematography and Mary J. Blige became the first person to ever be nominated for an acting and song award during the same year.