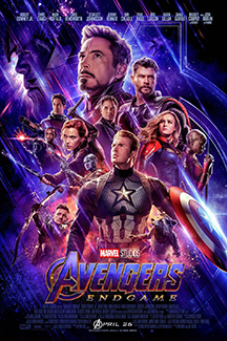 Avengers: Endgame is a superhero film based on the Marvel Comics superhero team,The Avengers. The film is produced by Marvell Studios and distributed by Walt Disney Studios Motion Pictures. Avengers: Endgame is the sequel to 2012’s “The Avengers”, 2015’s” Avengers: Age of Ultron” and 2018’s “Avengers: Infinity War” , it is also the 22nd film in the Marvel Cinematic Universe (MCU). Avengers: Endgame is directed by Anthony and Joe Russo and written by Christopher Markus and Stephen McFeely. Endgame picks up with the surviving members of the Avengers team, along with their allies working to reverse the damage caused by Thanos during the Infinity War. I for one, anticipated Endgame with bated breath. While I thought this was a decent sequel, I was somewhat disappointed.

Thanos (Josh Brolin) used the Infinity Stones to disintegrate half of all life across the universe, leaving us devastated by the deaths of our beloved super heroes. The world has waited in anticipation for the reversal of Thanos’ actions. Avengers: Endgame, part two of Avengers: Infinity, begins three weeks after the completion of Thanos’ dastardly deed, with Carol Danvers / Captain Marvel (Brie Larson) returning to Earth from deep space, carrying a spaceship containing Iron Man/Tony Stark (Robert Downey, Jr.) and Nebula (Karen Gillan) inside. Now the remaining Avengers, which include; Bruce Banner / The Hulk (Mark Ruffalo), Steve Rogers/Captain America (Chris Evans), Rocket (Bradley Cooper’s voice), Thor (Christopher Hemsworth), Natasha Romanoff / Black Widow (Scarlett Johansson) and James “Rhodey” Rhodes / War Machine (Don Cheadle), must find a way to go back in time to fix what Thanos has done. Using Nebula’s knowledge, they find an injured Thanos on an unguarded planet. Their plan is to retake the Stones and reverse his actions but find he has already destroyed them to prevent further use. An enraged Thor beheads Thanos, who is now an ordinary person without the powers of the stones.

Five years later, Scott Lang / Ant Man (Paul Rudd) escapes the quantum realm and meets Natsha Romanoff / Black Widow and Steve Rogers / Captain America at the Avengers’ compound. Scott explains that he experienced only five hours while trapped, which to him theorizes that the quantum realm allows time travel. The three heroes travel to ask Stark, because of his genius, to help them retrieve the Stones from the past so they can reverse Thanos’ actions in the present. Stark not believing this could be done refuses, mostly out of fear he’d lose his daughter, Morgan (Lexi Rabe). After having a short chat with his wife, Virginia “Pepper” Potts (Gwyneth Paltrow), Stark relents says good-bye to his family, then leaves to work with Banner, who has merged his consciousness with the Hulk’s body, hoping to stabilize travel in the quantum realm. Banner and Rocket go to the Asgardian refugees’ new home in Norway, to recruit a beer drinking, drunken, overweight Thor and Romanoff heads to Tokyo to recruit Clint Barton / Hawkeye (Jeremy Renner), who has turned into a ruthless vigilante following the disintegration of his family.

I think this is a good place to stop. It is difficult to critique this film because the entire story is a mystery for you to solve or not, so you don’t want to know how it ends or if they accomplish the mission. I was a little disappointed in this sequel. First, I felt Tony Shark deserved much more. I can’t elaborate on this since it would spoil the movie for you. Suffice to say, Iron Man should have a movie all to himself, which would give him the opportunity to explain his actions, past, present and future. I also feel Black Widow should be in that Iron Man movie to boost their fan’s moral, concerning what happened in the Endgame. I must inform you that this three hour and one minute movie is action packed with special effects beyond your greatest expectations. There were so many super heroes, from the present as well as the past, that you will find it hard to keep up. The beginning of Endgame tested our faith in the writers to pull off a Thanos’ reversal, as hopelessness was the only feelings we could muster up. After a long battle of defeats for the Avengers and company, we finally got some hope but it didn’t last long. I personally thought the Endgame could have been better written, as there were too many disappointments. Also, the quantum theory story was a bit hard to swallow. Terms like “your past is now your present” really took a lot of intellect to fully understand. BTW, that quantum statement is longer with deeper meaning; I just can’t spoil this for you by saying anymore. You have to see Avengers: Endgame for yourself. It is definitely worth seeing. The film received positive reviews for its direction, acting, entertainment value, musical score, visual effects and emotional weight, with critics lauding its culmination of the 22-film story. With an estimated budget of $356 million, it is one of the most expensive films ever made. It also broke numerous box office records and has grossed over $1.7 billion worldwide, becoming the highest-grossing film of 2019, as well as the fifth highest-grossing film of all time. Check It Out!