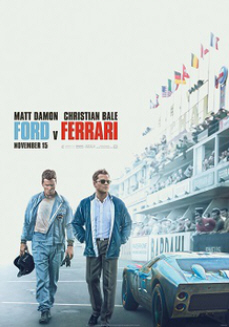 Ford v Ferrari (titled Le Mans ’66 in the UK and other territories) is a sports drama directed by James Mangold and written by Jez Butterworth, John-Henry Butterworth, and Jason Keller. The plot follows a determined team of American engineers and designers, led by automotive visionary Carroll Shelby and his British driver, Ken Miles. They are dispatched by Henry Ford II and Lee Iacocca with the mission of building the Ford GT40, a new racing car with the potential to finally defeat the perennially dominant Ferrari racing team at the 1966 24 Hours of Le Mans race in France. Despite the great trailers for this movie, I didn’t intend to see it but I kept hearing great reviews from friends so I finally gave in.  Ford vs Ferrari exceeded whatever expectations I had.

In 1963, Ford Motor Company Vice President Lee Iacocca (Jon Bernthal) suggests to Henry Ford II (Tracy Letts)  that he purchase the cash-strapped Ferrari as a means to boost their car sales, participating in the 24 Hours of Le Mans. Enzo Ferrari (Remo Girone), however, walks out of the deal because Fiat offered him a more lucrative deal that would allow him to retain his ownership of Scuderia Ferrari. In rejecting the proposed deal with Ford, Ferrari insults the company and its CEO. A furious Henry II orders his racing division to build a car to defeat Ferrari at Le Mans. For this task, Iacocca hires Shelby American, owned by Carroll Shelby (Matt Damon), a racing driver who won Le Mans in 1959 but was forced to retire due to an ongoing heart condition. In turn, Shelby enlists the help of Ken Miles (Christen Bale), a hot-tempered British racer and struggling mechanic. The two were best friends and had a long-standing relationship. Shelby and Miles test the Ford GT40 Mk I prototype at Los Angeles International Airport, working out all of its design flaws until it was race-ready. The events that followed were heartfelt and forever carved in history.

From this point in the movie, Ford vs Ferrari tells a compelling true story that is intriguing, to say the least.  Ford vs Ferrari, which is based on actual events, turned out to be a better story than I anticipated.  I expected a run of the mill movie with a lot of meaningless car races.  Not being into car racing, I didn’t know names of the car racing greats so Carroll Shelby and Ken Miles didn’t mean anything to me.  What a story Ford vs Ferrari turned out to be.  I don’t know quite how it was done, but the camera work, while they were racing, was magnificent. I felt like I was in the car with Ken Miles.  The excitement was non-stop.  I’m sure if you go to see Ford vs Ferrari, you’ll like it as much as I did. The film has grossed $172 million worldwide and received positive reviews from critics, who lauded the performances and racing sequences. It was chosen by the National Board of Review as one of the ten best films of the year, while Bale was nominated for the Golden Globe Award for Best Actor – Drama and the Screen Actors Guild Award for Outstanding Performance by a Male Actor in a Leading Role. FYI: In the early stages of the film’s production, Tom Cruise and Brad Pitt were cast in the starring roles, but those plans fell through. I believe the right actors were cast.  I found this true story exciting and I highly recommend it to everyone, not just car racing fans.  Check It Out!