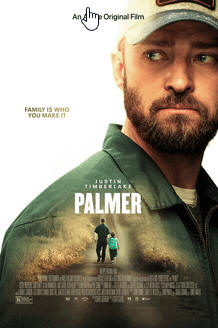 Palmer is a drama directed by Fisher Stevens and written by Cheryl Guerriero. The film focuses on a former college football star who is now an ex-convict. I was unsure of the plot but found Palmer to be heartfelt and well written.

Eddie Palmer (Justin Timberlake) is a former high school football star who just got out of prison after 12 years. He lives with his grandmother Vivian (June Squibb), who on occasion takes care of a fervent young boy named Sam (Ryder Allen). As a child, Sam has profound issues with gender and appearance.  There are times when Palmer has to step in on Sam’s behalf to handle the bullies.

Palmer eventually begins working at the local school as a janitor, and after Vivian passes away, is forced to become Sam’s temporary guardian because Sam’s mother Shelly (Juno Temple) constantly disappears from his life for weeks and even months at a time. Palmer takes Sam to the high school football game and a bowling fundraiser, striking up a relationship with Sam’s teacher, Maggie Hayes (Alisha Wainwright), as well as further bonding with Sam

Palmer deals with a subject matter that’s not often shown in film.  There are a couple of lingering questions to be answered, like why was Palmer in prison and why for 12 years?  Dealing with a child who has gender issues should be handled with the help of a therapist so how does Palmer take on this monumental task by himself.  Sam is brilliantly played as is Palmer.  I felt the movie gently dealt with these problems while staying focused on the two main characters.  There’s not a lot of action or special effects but there is a lot of heartfelt scenes of love and understanding.  I think Palmer is a must-see for everyone.  In July 2020, Apple TV+ acquired distribution rights to the film and released it on their service on January 29, 2021.  According to review aggregator Rotten Tomatoes, 77% of 90 critics gave the film a positive review, with an average rating of 6.4/10. The website’s critics’ consensus reads: “Although it traffics in familiar territory, Palmer is elevated by worthy themes and a strong ensemble led by an impressive Justin Timberlake.”  Palmer streams exclusively on Apple TV+ — Check It Out!