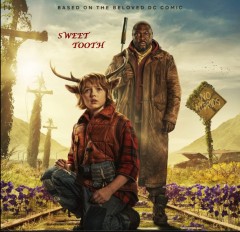 Sweet Tooth is a fantasy drama developed by Jim Mickle. It’s based on the comic book of the same name by Jeff Lemire. The appearance of this series looks childish but make no mistake, it holds its own as a serious drama with lots of curious adventures. Sweet Tooth has its own pandemic that has proven to be quite the worldwide global event of the decade. Many characters are introduced that give substance to this nicely done series, as in a sweet series for all the family.

Sweet Tooth opens ten years in the past as Dr. Aditya Singh (Adeel Akhtar) goes to work and discovers a deadly virus, which is taking over the world, wiping out most of the human population.  As if the virus wasn’t enough, babies started being born half-human, half-animal (hybrids).  It’s unknown which came first, the virus or the hybrids.  This pandemic was deemed “The Great Crumble”, and the H5G9 virus was deemed “The Sick”. Unsure if hybrids were the cause or a result of the virus, many humans feared and hunted them.

Sweet Tooth is a story about Gus / Sweet Tooth (Christian Convery), a half-human, half-deer hybrid. In order to protect Gus from the outside world of hatred towards hybrids, his father (Richard Fox), who Gus calls Pubba (Will Forte) lives in a secluded cabin in Yellowstone National Park and dies when Gus is nine years old. Gus discovers a box buried by his father beneath a tree that contained what Gus believed was a photograph of his mother, with the word “Colorado” written on it. Gus tries to manage on his own, remembering the rules his father set forth for him to live by.  A year passes when Gus decides to leave the wilderness in search of his mother.  Before leaving the make-shift home he and his father lived in, Gus starts a fire, which alerts nearby hunters to his location, putting him in danger as the hunters try to murder him for sport. Because Gus is able to speak, the hunters become visibly surprised. They are soon killed by Tommy Jepperd / Big Man (Nonso Anozie), a lone traveler who after saving Gus, tries to leave him behind but Gus follows him, insisting Jepperd (“Big Man”) escort him to find his mother in Colorado. Jepperd tries to resist but ends up protecting Gus on his journey.  BTW:  Jeppard was a famous professional football player before the apocalypse.

Sweet Tooth is not what you’d think a story like this would be about.  It’s adventurous with a ton of messages to be learned about bullies and how people act when they fear the unknown.  I found Sweet Tooth to be fun and mysterious while captivating its audience with lots of difficult situations and many twists and turns.  Gus and Jepperd meet all kinds of people on their journey before learning the truth about Gus’ mom.  I think everyone will enjoy this series. The series has been watched by 60 million households since its June 4 release on Netflix. Sweet Tooth is renewed for a second season.   Check It Out!