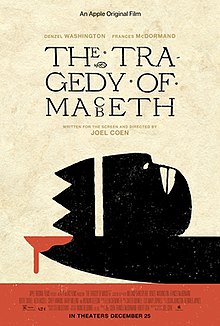 The Tragedy of Macbeth is a historical thriller written and directed by Joel Coen and based on the play Macbeth by William Shakespeare. It is the first film directed by one of the Coen brothers without the other’s involvement.  Macbeth is the story of the progeny of three witches.  I would not have watched this movie, except that again, Denzel is nominated for Best Actor.  I think this was Denzel’s best performance of all.

Macbeth (Denzel Washington), the Thane of Glamis and a warrior, along with Banquo (Bertie Carvel), a father and also, a warrior, brings the army of King Duncan (Brendan Gleeson) to victory over the treacherous Thane of Cawdor.  While on the battlefield, three witches tell Macbeth that he will be Thane of Cawdor and king hereafter.  However, when King Duncan appoints his son Malcolm (Harry Melling) as Prince of Cumberland, Macbeth sees this as a threat to him becoming king.  Alarmed, Macbeth writes to his wife, Lady Macbeth (Frances McDormand), and tells her all, including that the witches also prophesized that Banquo will father a line of kings.  Lady Macbeth arrives and convinces her husband to commit regicide when King Duncan comes to spend a night in Macbeth’s home.  Lady Macbeth drugs all of the king’s servants. Reluctantly, Macbeth kills the king and all the king’s servants to tie up loose ends.  Fearing for his own life, Duncan’s heir Malcolm flees to England, and Macbeth assumes the throne as the new King.  Macbeth also arranges to have Banquo and his son Fleance (Lucas Barker) killed by Ross (Alex Hassell). At a royal dinner, Macbeth starts to hallucinate, Lady Macbeth has to drug him to calm him down.  She dismisses the guests as her husband goes into a trance.  While in the trance, the witches revisit Macbeth and conjure a vision of Fleance, who tells him to beware of MacDuff (Corey Hawkins), Thane of Fief.  MacDuff shall be King until Great Birnam Wood comes to Dunsinane Hill, and that he shall be harmed by no man born of a woman. Macbeth orders the whole Macduff household be put to death, but Macduff himself survives, having earlier fled to England.  Lady Macbeth later becomes guilt-written, starts walking in her sleep then eventually, descends into madness. Upon meeting up with Macbeth, MacDuff declares a duel.

If you have read Macbeth or have seen any of the many productions of Macbeth, you know how the story ends.  If not, this is a great movie to learn what happens.  Denzel Washington may have performed at his best.  I didn’t know he was a Shakespearian actor.   There’s not much to say about a Shakespearian classic that hasn’t already been said.  I will warn you that the language is in full Shakespearian dialect, so if you don’t know or care for the old language, The Tragedy of Macbeth may not be suited for you.  On the review aggregator website Rotten Tomatoes, 93% of 261 critics’ reviews are positive, with an average rating of 8.2/10. The website’s consensus reads, “Led by a stellar Denzel Washington, The Tragedy of Macbeth strips the classic story down to its visual and narrative essentials.” The Tragedy of Macbeth is a great story and is streaming on Apple TV + — Check It Out!

[THE TRAGEDY OF MACBETH is Oscar-nominated at the 94th Academy Awards for BEST: Actor, Cinematography, and  Production Design — Totaling 3 Oscar Nominations]

This entry was posted in CURRENT MOVIE REVIEWS, STREAMING. Bookmark the permalink.