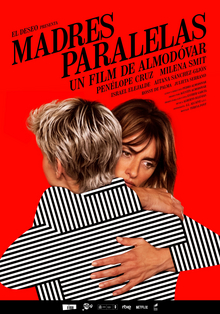 Parallel Mothers (Spanish: Madres paralelas) is a Spanish drama written and directed by Pedro Almodóvar. Parallel Mother follows a young mother who must make the right decision when she finds out there’s been a life-changing mistake made after she gives birth to a beautiful baby girl. Additionally, a friend works to prove that a terrible wrong was committed to families of Hispanic origin during the Spanish Civil War of 1936-1939. Despite having to read subtitles, I really liked this movie and how it showed an interesting and different approach to how the problems were resolved.

Photographer Janis Martínez (Penélope Cruz) does a photoshoot with renowned forensic archaeologist Arturo (Israel Elejalde). She asks him if his foundation will help excavate a mass grave in her home village, where her great-grandfather and other men from the village were killed and buried during the Spanish Civil War. Arturo agrees to review the case with his foundation.  Having connected romanticly with each other, Arturo and Janis end up sleeping together. Months later, Janis discovers she is pregnant and makes a decision to keep the baby and raise it alone, against Arturo’s wishes.  He has a wife who is undergoing chemotherapy but his heart and desires are to be with Janis.

Janis later shares a hospital room with Ana (Milena Smit), a teen single mother accompanied by her mother Teresa Ferreras (Aitana Sánchez-Gijón), who is an actress. The two women give birth at the same time. After both babies are held for evaluation, they are released, and Janis and Ana go their separate ways. Janis and Ana stay in touch, keeping one another updated on their babies’ progress. Arturo arrives one day asking to see the baby and reacts strangely, confessing that he does not believe the baby is his.  I am going to stop here because telling any more of Parallel Mothers would truly ruin what you think is going to happen.

Parallel Mother is not your run-of-the-mill story.  Watching how Janis handles her situation was quite interesting.  I thought this movie was brilliantly acted and presented unexpected ideas to the story. Parallel Mothers was released last year in December 2021 and is no longer being presented in theaters however, I understand Netflix has the rights to the film but only in Latin America.  Starting sometime in February, you may be able to rent Parallel Mothers on Prime Video. At its opening night world premiere, the movie received a nine-minute standing ovation from Venice Film Festival attendees in the Sala Grande. On review aggregator Rotten Tomatoes, 97% of 191 critics have given the film a positive review, with an average rating of 8.40/10. The website’s critic’s consensus reads: “A brilliant forum for Penélope Cruz’s talent, Parallel Mothers reaffirms the familiar pleasures of Almodóvar’s filmmaking while proving he’s still capable of growth.”  When Parallel Mothers becomes available, Check It Out!

This entry was posted in CURRENT MOVIE REVIEWS, STREAMING. Bookmark the permalink.