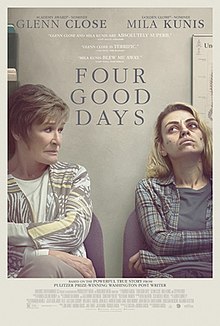 Four Good Days is a drama, directed and produced by Rodrigo García, from a screenplay by García and Eli Saslow, based upon Saslow’s 2016 Washington Post article “How’s Amanda? A Story of Truth, Lies and an American Addiction”. I hadn’t heard of this movie until its Oscar nod.  I later found Four Good Days is based on Libby Alexander, and her daughter Amanda Wendler. This is one of the great ones that has been left by the wayside and flew way under the radar.

Margaret “Molly” Wheeler, a 31-year-old drug addict walks to her mother’s house while reminiscing about better times before she became a drug addict. Molly insists that she is ready to be sober and begs her mother Deb (Glen Close) to allow her to stay for a few days before going to detox. Deb, although clearly ambivalent about the matter, stands resilient with the support of her husband Chris (Stephen Root), fearing that supporting Molly in any way will serve as an enabler. Molly spends the night outside on her mother’s porch and maintains persistence about her potential recovery. The next morning a frustrated Deb agrees to take Molly to detox. Upon arrival, it is revealed that Molly has been an addict for over a decade, has lost custody of her two children, and is on her 15th attempt at sobriety. Four days after commencing detox, Molly is offered by Dr. Ortiz (Carlos Lacamara), an opioid antagonist in order to help her on the road to sobriety. However, she must stay off any drugs for an additional four days before it is safe for her to receive the first shot and then expect an additional shot each month. Using this method with drugs in your system could result in a trip to the ER with severe pain and most likely death.

On her first day at home, Molly has deep conversations with her mother and learns about the many times she deceived her, causing unexplainable pain. Although at home, Deb remains suspicious of Molly’s intentions, but by the end of the day, Deb secretly begins to have hope.

On the second day, Sean (Joshua Leonard), Molly’s ex and her children’s father allows her to spend some time with them. After not seeing their mother over a year, the scene was awkward at first but they warm up quickly, happy to see her and make the most of their time together. She and Deb go grocery shopping, where they run into Coach Miller (Rebecca Field), who invites Molly to speak to her class on drug addiction. Back at home Deb reveals that she was very unhappy with Molly’s father Dale (Sam Hennings), as she felt forced into marriage after becoming pregnant with Molly’s older sister Ashley (Carla Gallo), and thus walking out on the family. Deb’s two-year abandonment is something Molly has always held against Deb, attributing it to her having become an addict. Deb dismisses this, admitting that Dale’s implied mental and emotional abuse was the reason for her leaving, much to Molly’s surprise.  Molly speaks to Coach Miller’s class on her third day home. While speaking to the class, she becomes very emotional and is blatant and transparent to the class about her situation and experiences, using the moment to vent. This causes Deb to openly express her optimism and hopes that this time, Molly will finally recover. After, Molly asks that Deb take her to see Sammy, a friend, and fellow addict. There, Deb has a chance encounter with Molly’s ex-boyfriend Eric (Chad Lindberg), who inadvertently reveals that Molly had been pregnant. Molly later confesses to Deb that she was pregnant, but gave the baby up for adoption.

Four Good Days is an emotional drama that deals with the serious episode of addition.  Glen Close be one of the more seasoned actresses brilliantly performed the likes of a mother who has put up with the down side of living with an addict.  She showed all the hesitants, fear, and finally love associated with the whole sorted affair.  Mila Kunis showed all the neuances of a drug addicted person.  The deceit, fantastic lies, and excuses were in full swing.  Takeing on an addicted love one without becoming an abler is one of the most difficult decision one can make.  I can’t understand why this well acted film didn’t get a decent Oscar nod.  Addition is a very big problem in today’s society and Four Good Days really kept it real.  On Rotten Tomatoes the film holds an approval rating of 53% based on 76 reviews, with an average rating of 5.7/10. The website’s critics consensus reads: “Four Good Days struggles to bring authenticity to its tragic source material and strands its talent in a bland melodrama.” Country star Reba McEntire sings the nominated song, “Somehow You Do” Four Good Days is a worth while movie for the whole family to see and is streaming on Hulu — Check It Out!