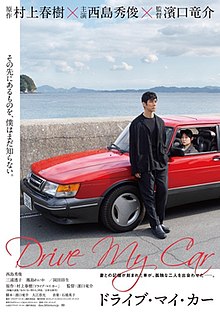 Drive My Car (Japanese: ドライブ・マイ・カー, Hepburn: Doraibu mai kā) is a Japanese drama co-written and directed by Ryusuke Hamaguchi. It is primarily based on Haruki Murakami’s short story of the same name from his 2014 collection Men Without Women while taking inspiration from other stories in it. The film follows Yūsuke Kafuku as he directs a multilingual production of Uncle Vanya in Hiroshima and grapples with the death of his wife, Oto. This is a very deep movie.  I thought the movie was too long (three hours) but a decent story.

Actor and theater director Yūsuke Kafuku (Hidetoshi Nishijima) is married to Oto (Reika Kirishima), a screenwriter. Oto conceives her stories during sex and narrates them to her husband, Yūsuke. After watching her husband in a performance of Waiting for Godot, Oto introduces Yūsuke to her frequent collaborator, the young actor Kōji Takatsuki (Masaki Okada).  One day, as Yūsuke is leaving for work, Oto tells him she wants to talk to him later that evening. Yūsuke returns home late to find Oto dead from a brain hemorrhage. After her funeral, Yūsuke has a breakdown during a performance of Chekhov’s Uncle Vanya and is unable to continue the show.

Two years later, Yūsuke accepts a residency in Hiroshima, where he will direct an adaptation of Uncle Vanya. Despite concerns about Kōji Takatsuki’s erratic behavior which has recently hurt his career and his young age, Yūsuke casts Kōji as Uncle Vanya. The theater company requires that Yūsuke not drive but be chauffeured in his own car, a red Saab 900. He objects at first, but relents after the reserved young female chauffeur, Misaki Watari (Tōko Miura), reveals herself to be a skilled driver. During their drives, Yūsuke and Watari begin to bond as Yūsuke tells her about Oto and the loss of their daughter, who would have been Watari’s age. Watari tells him about her abusive mother who died in a mudslide five years earlier.

Drive My Car focuses mostly on three people.  This profound story gets very heavy, making it very hard to predict any of the coming events.  Kōji’s lack of self-control surely means something significant to the entire story.  Watari’s story regarding her mother is also important to the story. Yūsuke’s relationships will also contribute to the outcome of the story, especially his wife, Oto.  I loved the movie but felt a lot of the scenes were too long.  Yūsuke and Watari take an extremely long drive to Hokkaido, which I felt I was taking with them because the director choose to drag out the driving scenes.  There were other parts of this film that I felt could have been cut out but I’m not the director.  There is much to this story and I won’t say Drive My Car is not worth seeing because it is very good and different from anything I’ve seen. In my opinion, it’s not easy to read subtitles for three hours.

On Rotten Tomatoes, the film holds an approval rating of 98% based on 166 reviews, with an average rating of 8.70/10. The website’s critical consensus reads, “Drive My Car’s imposing runtime holds a rich, patiently engrossing drama that reckons with self-acceptance and regret.” At the 79th Golden Globe Awards, the film won Best Foreign Language Film. Drive My Car is streaming on HBOMAX and is free if you subscribe — Check It Out!