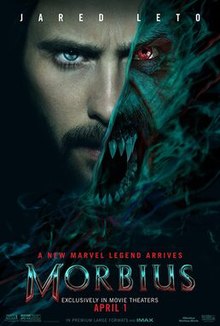 Morbius is a superhero film based on the Marvel Comics character of the same name, produced by Columbia Pictures in association with Marvel. Distributed by Sony Pictures Releasing, it is the third film in Sony’s Spider-Man Universe (SSU). Directed by Daniel Espinosa and written by Matt Sazama and Burk Sharpless. Marvel introduces Morbius to film from his inception as he becomes a living vampire after curing himself of a rare blood disease. Being a fan of Marvel, I hurried to see this new and exciting adventure, superhero film.  I thought the movie was fantastic.

At a hospital in Greece, 10-year-old Michael Morbius (Jared Leto) welcomes his surrogate brother Lucien (Matt Smith), whom he renames Milo Morbius; they bond over their shared blood illness and desire to be “normal”. Their adoptive father and hospital director Dr. Emil Nicholas (Jared Harris) arranged for Michael to attend medical school in New York while he focuses on caring for Milo, who like Michael, is wheelchair-bound but walks with crutches.

25 years later, Michael publicly declines a Nobel Prize for his work with synthetic blood. Michael’s colleague and love interest, Martine Bancroft (Adria Arjona) discover he has secretly captured dozens of vampire bats from Costa Rica in the hope of splicing their genes with his own to cure his condition. After informing Dr. Nicholas and Milo of his planned illegal experiment, Michael receives funding to outfit a private mercenary vessel in international waters with his equipment. While the cure worked, it transformed Michael into a vampire. Michael kills and drains the crew, all except his loyal assistant Martine, of their blood after they attack him out of fear. Once his bloodlust subsides and he regains his senses, a horrified Michael erases all CCTV footage of his experiment before contacting the authorities and jumping overboard.

Michael returns to New York and discovers he now has superhuman strength, speed, reflexes, and echolocation, with his vampire bats treating him as a bat. He subsists on his synthetic blood until it gradually ceases to satisfy his needs. FBI agents Simon Stroud (Tyrese Gibson) and Alberto “Al” Rodriguez (Al Madrigal) investigate Michael’s victims and deduce his involvement. Milo learns that Michael is cured, but becomes furious when Michael refuses to cure him as well.

To summarize, Michael finds a cure for his and Milo’s blood disease using vampire bats but can’t use the cure because it turns him into a raging, blood-thirsty, dangerous subhuman with a form of transgenic vampirism, that he can’t control.  His best friend, Milo wants the cure at any cost.  In the meanwhile, people are being killed and there’s little hope for Michael and Martine’s future together.  The FBI has gotten involved but, as usual, doesn’t have enough information to piece together the whole story.  About now, the movie is just getting started.  Michael’s character is rather frightening and because he’s out of control, there’s no telling what the end results will be.  This Marvel character is different from most, except the Hulk, because of the control issue.  Also, like the Hulk, people are easily killed, usually unbeknownst to the killer. Both turns into something other than themselves and both are driven by an outside force. I think this Marvel character has a real shot at being a beloved superhero because of his attitude and education.  Despite the reviews, I think the film was brilliantly acted with a decent plot.  As of April 6, 2022, Morbius has grossed $45.5 million in the United States and Canada, and $44.9 million in other territories, for a worldwide total of $90.4 million. On Rotten Tomatoes, the film has an approval rating of 17% based on 214 reviews, with an average rating of 3.9/10. The website’s critic’s consensus reads, “Cursed with uninspired effects, rote performances, and a borderline nonsensical story, this Spidey-adjacent mess is a vein [sic] attempt to make Morbius happen.” It ranks as one of the worst-reviewed superhero movies on the site. In January 2021, Leto said there was potential for Morbius to appear alongside the character Blade in a future project, with Mahershala Ali cast in that role for the Marvel Cinematic Universe (MCU). You can see Marbius in theaters now — Check It Out!