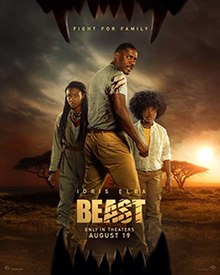 Beast is a thriller directed by Baltasar Kormákur from a screenplay by Ryan Engle and is based on a story by Jaime Primak Sullivan.  The plot revolves around a recently widowed doctor and his two teenage daughters who travel to a South African game reserve managed by an old family friend and wildlife biologist. What begins as a journey of healing and a chance to reconnect with his daughters, turns into a fight for survival.  I’m a huge fan of Edris so I was anxious to see Beast. The film was well done considering this is not a new concept.

Recently widowed Dr. Nate Samuels (Edris Elba) and his two teenage daughters, Meredith (Iyana Halley) and Norah (Leah Sava Jeffries) arrive at the Mopani Game Reserve in South Africa for a vacation. Nate reunites with his old friend, Martin Battles (Sharlto Copley) a biologist and Mopani manager, who introduced Nate and his wife. Martin takes Nate and the girls to the village where Nate’s wife grew up.

While Dr. Nate and his family were touring the reserve’s restricted areas, Martin discovers that one of the cubs is injured. Also at a nearby Tsonga community, he discovers most of the population is dead. The surroundings seemed suspicious and while investigating, things became very clear when a lion approached and tried to attack them with blood-thirsty notions. Trapped because they had no phone signal and no way to exit their surroundings, the beast had the upper hand.

The adventure was just getting started as the situation got worse.  No food, no water, no weapons, and no communication devise that worked.  What started out to be fun has now become a life-threatening game of survival.  Not only did they have to survive the beast but poachers appeared on the scene and were not friendly, displaying ill feelings because Martin is an anti-poacher and they knew it. I was enlightened by learning much about the kinds of animals poachers illegally hunt for gain.  The acting was very good, as there was a lot to overcome using these kinds of special effects. I recommend Beast to all.  It’s a sad situation but a very real one.  Beast has grossed $12.5 million in the United States and Canada, and $10.6 million in other territories, for a worldwide total of $23.1 million. On the review aggregator Rotten Tomatoes, 65% of 127 reviews are positive, with an average rating of 6.1/10. The site’s critic’s consensus reads, “Want to watch Idris Elba fight a lion? The admirably lean yet ultimately disposable Beast is just the movie you’re looking for.” Beast is currently playing in theaters — Check It Out!