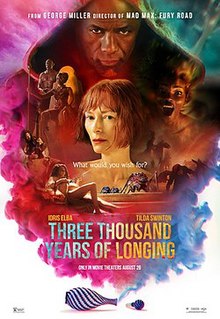 Three Thousand Years of Longing is a dark fantasy directed by George Miller. He wrote the screenplay with Augusta Gore, adapting the 1994 short story “The Djinn in the Nightingale’s Eye” by A. S. Byatt. The film was released in the United States on August 26, 2022, by Metro-Goldwyn-Mayer (via United Artists Releasing).  When I saw the trailer, I was immediately intrigued because the plot looked different and interesting. Also, I am a big fan of the two leading actors.  I loved the movie and thought it held many truths. Well done Mr. Miller!

Alithea Binnie (Tilda Swinton) is a lonely British scholar who is occasionally suffering from bizarre hallucinations of demonic beings. During a trip to Istanbul, Alithea purchases an antique bottle where she accidentally unleashes a Djinn (Edris Elba) who was trapped inside it. After struggling to open the bottle, the Djinn appears as an extremely large man. He offers to grant Alithea three wishes in exchange for his freedom, but only if each wish is from her heart’s desire. Alithea argues that historically, wishing has always resulted in tragedy thus accusing him of being a trickster. In response to her accusation, the Djinn tells her three tales of how he ended up trapped in the bottle, with the final one moving Alithea to the point where she makes an unusual and totally unprecedented wish.

The stories that the Djinn tells are so moving and so captivating, that it became hard to look away.  One story tells of the Queen of Sheba (Aamito Lagum) who is devastatingly beautiful.  The audience was mesmerized as the camera shot a close-up of her face.  The special effects were some of the best I’ve seen. There are many stories that make up this film and all of them are well told. During the Djinn’s storytelling, it becomes clear that you are not going to be able to predict the outcomes. Three Thousand Years of Longing turns out to be a romantic love story to the nth degree, I had never seen or heard anything like it.  True fantasy is at its best in this dark love story.  I really enjoyed it.  The movie is projected to gross around $5 million from 2,436 theaters in its opening weekend. It made $1.4 million on its first day. On the review aggregator website Rotten Tomatoes, 70% of 140 critics’ reviews are positive, with an average rating of 6.5/10. The website’s critic’s consensus reads, “Although its story isn’t as impressive as its visual marvels, it’s hard not to admire Three Thousand Years of Longing’s sheer ambition.” Three Thousand Years of Longing is currently in theaters — Check It Out!