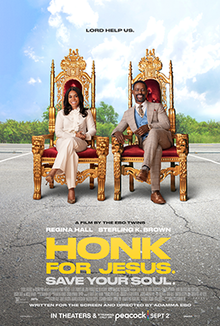 “Honk for Jesus. Save Your Soul.” is a  comedy written, directed, and produced by Adamma Ebo, in her feature directorial debut. It is a feature-length adaptation of Ebo’s 2018 short film of the same name. Regina Hall and Sterling K. Brown, are producers on the film alongside Daniel Kaluuya, who produced “Honk for Jesus. Save Your Soul.” under his 59% Productions banner, with Jordan Peele serving as executive producer under his Monkeypaw Productions banner. I wasn’t sure what to expect — the film didn’t offer much and I didn’t get much from watching it.  Other than a couple of funny lines, this movie was a wash.

“Honk for Jesus. Save Your Soul.” is a satirical comedy starring Regina Hall (Trinitie Childs), who was the proud first lady of a Southern Baptist megachurch, along with her husband Pastor Lee-Curtis Childs (Sterling K. Brown), who once served a congregation in the tens of thousands. But after a scandal forces their church to temporarily close, Trinitie and Lee-Curtis must reopen and rebuild their congregation to make the biggest comeback that commodified religion has ever seen.

There’s not much to tell because the film lacked substance and a substantial storyline.  In a nutshell, the mega-church afforded the Childs riches which included a house, several cars, a wardrobe of Prada, among other expensive designer clothes, a service staff, and a privileged attitude, fit for the very rich and famous.  Of course, the scandal was about sex and the consequences have yet to be realized. The film dealt with the couple trying to erase the past with words, not having a clue about what they had done.  I was told Honk for Jesus was a satire but it didn’t look or feel like one.  In my opinion, it may be a waste of your time seeing this really uninformative film.  I’m not sure what the message was I only know the message wasn’t the only thing Honk for Jesus was missing.  On the brighter side, I must say, Sterling K. Brown has an 8-pack that can stand among the best of them. His fashion sense in this film was impeccable. He really was shown off as a real heartthrob. Being the film just started on 9/1/22, this long Labor Day weekend has not ended making the stats lower than they will be on Monday evening. So far Honk for Jesus has grossed worldwide $1.75M.  On Rotten Tomatoes, the film holds an approval rating of 76% based on 83 reviews, with an average rating of 6.3/10. The site’s critical consensus reads, “Honk for Jesus. Save Your Soul. has some broad targets but refuses to take cheap shots at them, instead offering a pointed, well-acted satire of organized religion. “Honk for Jesus. Save Your Soul.” is currently playing in theaters — Check It Out!