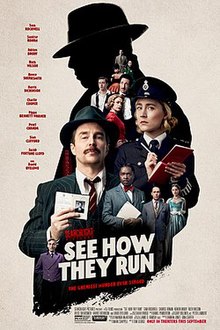 See How They Run is a mystery comedy directed by Tom George, written by Mark Chappell, and produced by Damian Jones and Gina Carter. The trailers for this film really made this who-done-it very appealing however it was the worse who-done-it I’ve seen.

There are a few laughs but basically, See How They Run is a dry and slow production in comparison to other types of this style of film.

In 1953 London, Agatha Christie’s play The Mousetrap celebrates its 100th performance, and the sleazy American director Leo Köpernick (Adrien Broady) attempts to convince the producer, John Woolf  (Reece Shearsmith) to allow him to direct the film adaptation. After Köpernick’s drunken behavior towards the female lead Sheila Sim (Pearl Chanda) leads to a fistfight with her husband and co-star Richard Attenborough (Harris Dickinson), Köpernick is killed backstage by an unseen assailant. Inspector Stoppard (Sam Rockwell) investigates the murder, shadowed by the inexperienced Constable Stalker (Saoirse Ronan). Everyone at the theatre is declared a suspect and a potential victim, including the play’s producer Petula Spencer (Ruth Wilson), and Woolf’s wife Edana Romney (Sian Clifford).

Most who-done-it movies are contained to the place where the murder took place, showing almost nothing of the rest of the county.  This film focused on every place else.  Scenes like the police station, the court, other participants’ homes, and verious street venues made up the locations. Situations that were supposed to be funny barely got a chuckle from me or the audience.  If that wasn’t enough, much of the film was predictable.  The ending was a disaster and the implication that Agatha Christie was a bit cuckoo was a little insulting to a great legend. I felt Brody, Oyelowo, and the undertrained constable carried the film. As of 21 September 2022, See How They Run has grossed $3.9 million in the US and Canada, and $4.6 million in other territories, for a worldwide total of $8.5 million.  On the review aggregator website Rotten Tomatoes, 71% of 140 critics’ reviews are positive, with an average rating of 6.5/10. The website’s consensus reads, “See How They Run may not do itself many favors by asking for Christie comparisons, but this is still one fun whodunit.” Obviously, I don’t agree with Rotten Tomatoes, after all, this review is just my opinion.  I think you must judge for yourself. See How They Run is currently in theaters — Check It Out!