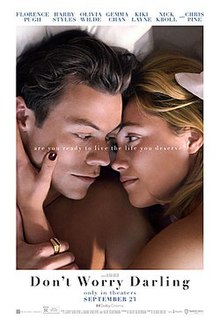 Don’t Worry Darling is a psychological thriller directed by Olivia Wilde from a screenplay by Katie Silberman, based on a story by Carey Van Dyke, Shane Van Dyke, and Silberman. A young wife living in a 1950s company town begins to believe there is a sinister secret being kept from her by the man who runs it. I thought the film closely resembled The Stepford Wives, which was originally released in 1975 with Joanna Eberhart and Katherine Ross and then remade and released in 2004 with Nicole Kidman and Christopher Walken. I was anxious to see this new movie, which was decent but not great but I did find it resembled The Stepford Wives when referring to the ultimate goal.

Don’t Worry Darling opens with Alice (Florence Pugh) and Jack Chambers (Harry Styles) living in an idyllic neighborhood in the 1950’s American company town of Victory, California. Every day, the men go to work at Victory Headquarters out in the surrounding desert, while their wives, among them Bunny (Olivia Wilde) and Margaret (KiKi Layne), stay home to clean, relax, rare their children, if any, and prepare dinner for their husbands. The women are discouraged from asking questions about their husbands’ work, which is classified, and are also told not to venture out into the desert where Headquarters reside. Margaret has become an outcast after taking her son out into the desert.  The trip resulted in her son’s apparent death, but Margaret claims that Victory took him from her as punishment. While attending a party hosted by Victory’s enigmatic founder, and leader Franck (Chris Pines), along with his wife Shelley (Gemma Chan), Alice sees Margaret’s husband Ted (Ari’el Stachel) attempt to give her medication. This becomes the beginning of the end for Victory, or is it?

Don’t Worry Darling is not a horror story but a horrible situation for anyone who drinks the cool-aid, reference to Bill Jones. The movie is slow-moving for the first half but picks up in the third quarter, never becoming too exciting. Brilliantly acted, the characters gave the aura of weirdness with a tinge of suspense.  You knew something was up, but couldn’t imagine what. If things work out, a stamp of lifetime privilege should display across each member’s forehead. One of the most memorable features of the film was the music.  Old songs played continuously throughout the movie.  I even found myself singing very lowly in the theater.  As of September 28, 2022, Don’t Worry Darling has grossed $24.4 million in the United States and Canada, and $14.4 million in other territories, for a worldwide total of $38.8 million. On the review aggregator website Rotten Tomatoes, the film has an approval rating of 38% based on 262 reviews, with an average rating of 5.4/10. The website’s critic’s consensus reads, “Despite an intriguing array of talent on either side of the camera, Don’t Worry Darling is a mostly muddled rehash of overly familiar themes.” While I view Don’t Worry Darling as a couple of steps up from the Rotten Tomatoes website, I do think it’s worth seeing. BTW, I didn’t like the ending and there were some questions that were never answered.  Don’t Worry Darling is playing in theaters — Check It Out!