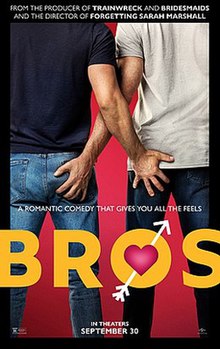 Bros is a romantic comedy directed by Nicholas Stoller from a screenplay he co-wrote with Billy Eichner, who is also an executive producer on the film. Stoller, Judd Apatow, and Joshua Church also produce the film. I thought Bros was going to be very funny but the best jokes were given away in the trailers. Most folks I spoke with thought Bros was going to be a satire. I’m not sure what it was, as I didn’t like most of this film and almost walked out of the theater after about 30 minutes of play. I decided to give it some time and it got a little better.

Bobby Leiber (Billy Eichner) is creating another episode of his New York podcast and radio show called The Eleventh Brick at Stonewall. He talks with callers about his written works on gay history and gay icons. He claims to be fine with being single and not having found love, hooking up with random men over Grindr (a dating app).

While attending an awards ceremony for the LGBTQ community, he wins an award for “Best Cis Male Gay Man” (a person who was assigned male at birth and whose gender identity is male). He announces that he has accepted a position as a curator for the upcoming new National LGBTQ+ History Museum in Manhattan, the first such museum in the world.

Bobby joins his friend Henry (Guy Branum) at a nightclub in the city where a new gay dating app is being launched and spots Aaron Shepard (Luke Macfarlane), whom Henry describes as hot but “boring”. Aaron and Bobby flirt and exchange a kiss, but Aaron doesn’t appear interested in Bobby. A few days later, the two start to spend time together, but the relationship is rocky, as Bobby’s excessive outspoken behavior ends up causing a rift between the two men.

This is where this shaky story starts to take shape or not. Even a small role and appearance by Debra Messing couldn’t save this boring, badly acted movie.  For the first time in over two decades, I almost walked out on a film.  It sounded like Bobby was reading from a handheld script, plus he was always angry, and his acting was totally unconvincing.  He talked so much, the dialogue became annoying rather than informative. I didn’t expect much from Bros and the film lived up to my expectations. I will say halfway through, the story got a little better but not enough for me to say it was worth the watch. There were many gay talented actors like Harvey Fierstein and Guy Branum who had great scenes but the big problem was the incredibly loud, unlikeable Billy Eichner. So here’s the box office and critical response to Bros: The film went on to debut $4.9 million, finishing fifth at the box office. Bros have gone on to gross worldwide $10,836,000. On the review aggregator website Rotten Tomatoes, the film holds an approval rating of 89% based on 152 reviews, with an average rating of 7.8/10. The site’s critics’ consensus reads, “Bros marks a step forward in rom-com representation – and just as importantly, it’s a whole bunch of fun to watch.” IMDB users were not as nice.  Bros is currently playing in theaters — Check It Out!