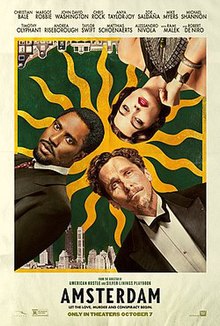 Amsterdam is a period comedy thriller written, directed, and produced by David O. Russell. It was released in the United States by 20th Century Studios. The story is based on the Business Plot, a 1933 political conspiracy in the US, and follows three friends—a doctor, a nurse, and a lawyer—who are caught in the mysterious murder of a retired US general. The trailers for Amsterdam gave a compelling synopsis into seeing this movie. For me, I think the message and the film are great.

In 1918, Burt Berendsen (Christian Bale) is sent by his estranged wife’s parents to fight in World War I. While stationed in France, Burt meets and befriends an African-American soldier named Harold Woodsman (John David Washington). After they sustain injuries in battle, Burt and Harold are nursed back to health by Valerie Voze (Margot Robbi), an eccentric nurse who makes art out of shrapnel she removed from wounded soldiers. They also develop lifetime friendships with the wounded soldiers.

Burt, Harold, and Valerie move to Amsterdam, where they live together and become close friends until Burt returns to New York City to be with his wife Beatrice (Andrea Riseborough). Harold, who has fallen in love with Valerie and begun a tenuous romantic relationship with her, also leaves to go to New York and fulfill his own aspirations.

Fifteen years later, Burt has opened his own medical practice catering to veterans of the war, but still remains friends with Harold, who is now a lawyer. They have not heard from Valerie since they left Amsterdam. Harold asks Burt to perform an autopsy on Bill Meekins (Ed Begley Jr.), a senator who served as the commander of their regiment during the war, at the behest of Meekins’ daughter Elizabeth Meekins (Taylor Swift), who believes that her father was murdered. Burt performs the autopsy with the help of nurse Irma St. Clair  (Zoe Saldaña).  The autopsy yields revealing information.

From this point on the story really gets involved.  The appearances of at least 10+ A-list actors are part of this stela cast which includes Chris Rock, Anya Taylor-Joy, Zoe Saldaña, Mike Myers, Michael Shannon, Timothy Olyphant, Andrea Riseborough, Taylor Swift, Matthias Schoenaerts, Alessandro Nivola, Rami Malek, and Robert De Niro. It’s been my experience that when too many well-known actors appear in a movie, it seldom turns out well.  Surprisingly, Amsterdam was not one of them.  According to IMDB, “this film was inspired by the Business Plot, a 1933 political conspiracy in which wealthy American businessmen and bankers plotted a military coup d’état to overthrow President Franklin D. Roosevelt and replace him with a fascist veterans’ organization headed by U.S. Marine Corps Major General Smedley Butler. Butler revealed the plot in testimony under oath to the U.S. House of Representatives Special Committee on Un-American Activities in 1934. The committee concluded that a plot was indeed concocted, but none of the plotters were prosecuted.” While Amsterdam has a dark side to it, I thought it was funny, mysterious, and well-acted.  As of October 18, 2022, Amsterdam has grossed $12.1 million in the United States and Canada, and $6.6 million in other territories, for a worldwide total of $18.7 million. On the review aggregator website Rotten Tomatoes, 33% of 215 critics gave the film a positive review, with an average rating of 5.1/10. The site’s critic’s consensus reads: “Amsterdam has a bunch of big stars and a very busy plot, all of which amounts to painfully less than the sum of its dazzling parts.” Obviously, I do not agree with Rotten Tomatoes. I also think media exposure and advertising for Amsterdam were insufficient for this time-appropriate, period piece.  Amsterdam certainly comes at the right time considering all the bias and controversy we are experiencing right now. I highly recommend Amsterdam which is currently playing in theaters — Check It Out!