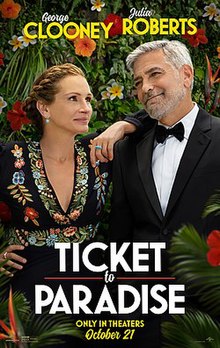 Ticket to Paradise is a romantic comedy about a divorced couple who decide to team up and sabotage the impending wedding of their daughter. The film is directed by Ol Parker and written by Parker and Daniel Pipski.

I expect “Ticket to Paradise” to be an end-of-the-summer fill-in. However, despite being totally unbelievable with a familiar, overdone topic, it was still a  nice getaway, funny, and well done.

David (George Clooney) and Georgia Cotton (Julia Roberts) were formerly married.  Having gone through a bitter divorce 20 years ago, the Cottons are currently in a hate relationship and regret having ever been married. Their daughter and only child, Lily (Kaitlyn Dever) graduates from law school and goes on vacation with her best friend and fellow graduate Wren Butler (Billie Lourd) to Bali. While snorkeling off the coast, their tour boat inadvertently leaves them behind. They are rescued by a young Balinese seaweed farmer named Gede (Maxime Bouttier). Lily and Gede are immediately attracted to each other and start a relationship. 37 days later, Lily emails her parents, David and Georgia, to let them know she and Gede are getting married, plus she is staying in Bali permanently, giving up her legal career before it begins. David and Georgia form a truce to try and convince Lily that she is rushing into things and making the same mistake that they made. Their flight to Bali turns out to be piloted by Paul (Lucas Bravo), Georgia’s long-term boyfriend. Paul picked this flight to fly as a surprise to Georgia enabling them to spend time in Bali and then return home together. So the fun begins.  Plots, twists, and turns commence as David and Georgia give their verbal blessing to Lily and Gede, but secretly plan a “Trojan horse” strategy to sabotage the wedding from within.

Ticket to Paradise was filmed in Barcelona, which is a city on the coast of northeastern Spain. It is the capital and largest city of the autonomous community of Catalonia, as well as the second most populous municipality of Spain. The scenery was breathtakingly beautiful.  The story was somewhat pleasant and the humor was enough to keep us laughing throughout the film.  If you’re looking for suspense, drama, or something new, you won’t get it in this movie.  As I said, this film was a nice getaway and to some, cute.  George and Julia looked amazing.  They don’t seem to age and I don’t think I see signs of botox or surgery.  Being veteran actors, their portrayal of David and Georgia Cotton was brilliant.  I will note that getting a law degree takes quite the effort and to give it up before getting one’s foot wet, is inconceivable to me. As of October 23, 2022, Ticket to Paradise has grossed $16.3 million in the United States and Canada, and $82.4 million in other territories, for a worldwide total of $98.7 million.  On the review aggregator website Rotten Tomatoes, 56% of 168 critics’ reviews are positive, with an average rating of 5.60/10. The website’s consensus reads, “Ticket to Paradise may not send viewers all the way to the promised land, but this reunion for a pair of megawatt stars is still an agreeably frothy good time.”  I recommend Ticket to Paradise, which is currently playing in theaters — Check It Out!