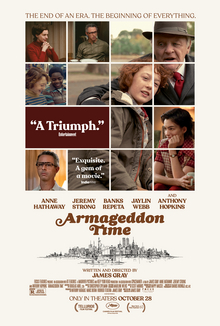 Armageddon Time is a coming-of-age drama written, directed, and produced by James Gray. Inspired by Gray’s childhood experiences, the story follows a young Jewish-American boy who befriends a rebellious African-American classmate and begins to struggle with expectations from his family and growing up in a world of privilege, inequality, and prejudice. While this film did not move mountains, it was informative for some who didn’t know, well acted, and offered no solutions — in other words, hopeless!

In 1980 Queens, New York City, on his first day in 6th grade, 12-year-old Jewish-American Paul Graff (Banks Repeta) becomes fast friends with an African-American boy named Johnny (Jaylin Webb) who was a year older because he was held back by a year.  Paul noticed that Johnny gets harsher treatment from their teacher, Mr. Turkeltaub (Andrew Polk) when they both joke around in class. The two still bond over their love of music. Paul often disassociates from his schoolwork and draws pictures instead, as he is a brilliant artist. Johnny had dreams of being an astronaut but is learning for someone in his situation, his dream is hopeless.

Paul lives with his financially stable family of Jewish heritage. He is very close with his grandfather Aaron Rabinowitz (Anthony Hopkins), who encourages him to pursue his aspirations of becoming an artist. His well-meaning parents, Irving Graff (Jeremy Strong) and Esther Graff (Anne Hathaway) do not support Paul’s career choice despite how well he sketches or draws. At night, Aaron tells Paul the story of how Aaron’s mother escaped antisemitic persecution in Ukraine, as she escaped to London before eventually immigrating to the United States with Aaron and her husband.

One day, Paul and Johnny are caught smoking cannabis in the restrooms, unaware that it’s an illegal drug. Furious, Esther forces Irving into beating Paul as punishment. Hoping that he becomes more disciplined, Paul is sent to a private school by his parents, where his older brother Ted Graff (Ryan Sell) is studying. Following Paul’s expulsion, Johnny realizes he’s never going to achieve his goals in this public school, so he stops going.

Paul’s private school is overseen and financed by Fred Trump (John Diehl), with his daughter Maryanne Trump (Jessica Chastain), one of the school’s famous alumni, delivering a speech to the students about working to earn success. Paul sees the improvements over his previous education but still doesn’t feel welcome at the school. Paul “befriends” other students but is unnerved by their racist comments when Johnny meets with him during playtime outdoors. Johnny has been living with his grandmother (Marjorie Johnson), who has Alzheimer’s disease.  Authorities are making preparations to place her in an institution so Johnny begins living in secret at Paul’s clubhouse, to avoid being put into the system under foster care.

This is the situation leading into Armageddon Time.  It’s one of despair and hopelessness but absolutely true.  Despite the two boys’ plans to better themselves, they just continue to bury themselves in more problems, at least one of them does.  The movie ends with Johnny still hopeless and Paul still privileged.  I’m not sure of the purpose of Armageddon Time except to show real-life problems due to racism and injustice.  The film was well acted, and the environment didn’t look anything like Queens, but that was mainly because the movie was shot in New Jersey.  I thought the Graff family was out of control, as the children were headstrong and seemed to defy their elders at every turn. FYI: Johnny’s character in real life was killed during a drug deal.  Armageddon Time has grossed $902,175 domestically, and $92,000 internationally, totaling $994,175 Worldwide.  On the review aggregator website Rotten Tomatoes, 75% of 153 critics’ reviews are positive, with an average rating of 6.7/10. The website’s critical consensus reads, “Armageddon Time finds writer-director James Gray excavating his own past and returning with a well-acted drama refreshingly free of nostalgia.” I found Armageddon Time depressing because of the current situation in the United States and the hopelessness of racism, greed, and power-hungry politics.  What is the answer? Armageddon Time is currently playing in theaters — Check It Out!