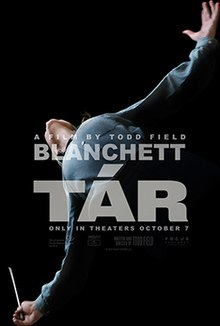 Tár is a drama directed, written, and produced by Todd Field. This is his first film since the release of Little Children (2006).

Tár follows the life and downfall of a renowned female composer-conductor as she seeks to maintain her power, status, and image.

This film is not for everyone however, it was brilliantly done and I thoroughly enjoyed it.

Lydia Tár (Cate Blanchett) is one of the greatest living composer-conductors and the first female chief conductor of the Berlin Philharmonic. In an interview with Adam Gopnik (Himself)  at The New Yorker Festival in New York City, she promotes several new projects, including most prominently, her upcoming live recording of Mahler’s 5th Symphony. Lydia relies on Francesca Lentini (Noémie Merlant), her attentive personal assistant, and Sharon Goodnow (Nina Hoss), her sickly wife, and concertmaster. Lydia has lunch with Eliot Kaplan (Mark Strong), a conductor who also manages a fellowship program she founded for aspiring women conductors. Lydia discloses her plan to replace her assistant conductor, Sebastian Brix (Allan Corduner), presumably with Francesca, and to fill an open cello position in the orchestra.  Later, Lydia (as a  guest) teaches a class at Juilliard. She ridicules a student’s lack of interest in conducting the classical masters on the basis of identity politics, encouraging the students to look past superficial differences to the music underneath, from which they can learn. The criticized student storms out.  In Berlin, Lydia receives Vita Sackville-West’s novel Challenge, sent by Krista Taylor, a former member of her fellowship program. It is suggested through dream sequences and email interactions that Lydia groomed Krista into a sexually transactional relationship that later fell apart. Lydia attempts to blacklist Krista, encouraging Francesca and other conductors to delete any emails from or about her.

As you can see, a pattern of corrupt behavior has developed in Lydia. Her character is now displayed as a nasty person.  Lydia continues her bad behavior, which takes her to even darker places.  I was mesmerized by this story which was brilliantly told.  Lydia continues to spiral down a darkened path that ends up in the most bizarre circumstance I’ve ever encountered.  FYI: Mahler Symphony No. 5, I. Trauermarsch is the movement that Lydia is primarily concerned with conducting throughout Tár. Its opening acts as a backdrop for the film’s climactic moments. I can’t say enough about Cate Blanchet’s acting abilities, she will go down as one of the best.  In the United States and Canada, the film made $158,620 from four theaters in its opening weekend, then $330,000 from 36 theaters in its second. In its third weekend, the film made $500,035 from 141 theaters. Expanding to 1,087 theaters in its fourth weekend, the film made $1.02 million, finishing 10th. On Rotten Tomatoes, 92% of 210 critics’ reviews are positive, with an average rating of 8.3/10. The website’s consensus reads, “Led by the soaring melody of Cate Blanchett’s note-perfect performance, Tár riffs brilliantly on the discordant side of fame-fueled power.” I highly recommend Tár, which is playing in theaters — Check It Out!