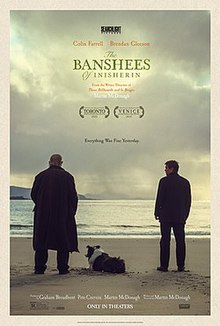 The Banshees of Inisherin is a dark comedy written and directed by Martin McDonagh. The film follows lifelong friends who find themselves at an impasse when one abruptly ends their friendship. The Banshees of Inisherin seemed like an interesting story, I think it was entertaining.  It reunites the two main stars, who previously worked together on McDonagh’s directorial debut “In Bruges” back in 2008.

In 1923, on the small fictional Irish isle of Inisherin during the Irish Civil War, folk musician Colm Doherty (Brendan Gleeson) and Pádraic Súilleabháin (Colin Farrell) appeared to have a friendship for many years.  Suddenly, without notice, Colm decides to dissolve their friendship.  Confused and upset Pádraic who doesn’t live far from Colm, becomes depressed and will do anything to restore their relationship. Pádraic’s sister Siobhán Súilleabháin (Kerry Condon) lives with her brother and is an acquaintance of Siobhán.  She cannot understand what’s going on with her brother’s old drinking buddy. Pádraic, though nice and well-liked by the islanders, is too dull for Colm, who wishes to spend the remainder of his life composing music and doing things that he will be remembered for. Pádraic’s life is destabilized by the loss of one of his few friends; as Pádraic grows increasingly distressed at the rejection, Colm becomes more resistant to his old friend’s attempts to speak to him. Colm eventually gives Pádraic an ultimatum: every time he bothers him or tries to talk with him, he will cut off one of his own left fingers with a pair of sheep shears. Siobhán plays the violin/fiddle with a local band, so cutting off any of his fingers would be devastating to his future as a musician.