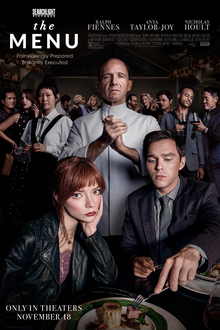 The Menu is a black comedy horror film directed by Mark Mylod, written by Seth Reiss and Will Tracy, and produced by Adam McKay, Betsy Koch, and Will Ferrell. Since I don’t like horror films, I had no desire to see The Menu. Due to unforeseen circumstances, I found myself in a situation where I had to make a decision; should I or shouldn’t I.  As it turns out, I should have stuck to my guns as this film has racked up my worst movie experience of 2022, in my opinion.

Tyler (Nicholas Hoult) and his companion Margot Mills / Erin (Anya Taylor-Joy) travel by boat to Hawthorne, an exclusive restaurant owned and operated by celebrity chef Julian Slowik (Ralph Fiennes), located on a private island. The other guests attending the dinner are (Janet McTeer) Lilian Bloom, a food critic; her editor Ted (Paul Adelstein); wealthy couple Richard (Reed Birney) and Anne Liebbrandt (Judith Light); George Diaz (John Leguizamo), a post-prime movie star and his personal assistant Felicity (Aimee Carrero); and business partners Soren (Arturo Castro), Dave (Mark St. Cyr), and Bryce (Rob Yang). The group is given a tour of the island by the restaurant maitre d’, Elsa (Hong Chau), who notes that Margot was not Tyler’s designated guest for the evening. Slowik is a celebrity chef and the owner of the Hawthorne restaurant, who has a ritualistic mentality and has lost his passion for his craft. This became the sole point of The Menu and I don’t think it was worth the watch.  The courses and Slowik’s accompanying monologues gradually become more disquieting and violent, which in many ways became the beginning of the end.

The Menu focuses on the above twelve characters plus the staff.  If you are planning to see The Menu, any further information will definitely spoil it for you.  The menu choices were spectacular and the food was prepared with the expertise of a master chef.  The evening evolved into a fearful, crazy series of events that would send the best of us into a serious meltdown.  Murder, mayhem, and suspense are plentiful.  The message was ambiguous and the ending was just plain awful. Keep in mind, the trailers did a fabulous job of selling this movie as a horror story that seemed scary and thrilling. As of November 26, 2022, The Menu has grossed $15.5 million in the United States and Canada, and $6.2 million in other territories, for a worldwide total of $21.7 million. On the review aggregator website Rotten Tomatoes, 89% of 214 critics’ reviews are positive, with an average rating of 7.6/10. The website’s consensus reads, “While its social commentary relies on basic ingredients, The Menu serves up black comedy with plenty of flavors.” Obviously, I don’t understand or agree with Rotten Tomatoes but my thoughts jive with my entertainment value.  The Menu is currently showing in theaters — Check It Out!