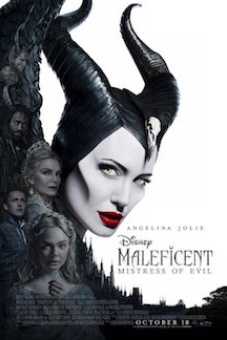 Maleficent: Mistress of Evil is a dark fantasy adventure film produced by Walt Disney Pictures, directed by Joachim Rønning, and written by Linda Woolverton, Micah Fitzerman-Blue and Noah Harpster. It is a sequel to the 2014 film Maleficent. I enjoyed this sequel and have mostly good things to say about it.

When we last left Maleficent (Angelina Jolie), she had shed her evil disposition, restored the Moors to its former light and was well on her way to being a gracious, reformed God-mother, raising Aurora (Elle Fanning) as her own. Aurora is also now the reigning Queen of the Moors and Maleficent is guardian and protector. However, in the five years since King Stefan’s death, we learn that mistrust and circumstances defined a new Maleficent as evil as the Maleficent of old. What happened to define Maleficent this unearned character judgment? What we didn’t know, was lurking in a nearby kingdom called Ulstead, lived the queen and mother Ingrith (Michelle Pfeiffer) of Prince Phillip (Harris Dickinson) who is instrumental in shaping most of our thinking about Maleficent. In this sequel, Aurora is proposed to by Prince Phillip. Little did we know, Aurora’s answer to that proposal would be the foundation for which the entire story would be based. While Phillip’s father King John (Robert Lindsay) wishes for peace, his mother Queen Ingrith has been secretly preparing for war. Many lives will change and many truths will be revealed, including a major reveal for the mysterious Maleficent. Hidden in areas of the castle, workers make weapons and ammunition out of iron, deadly to all fairies. Diaval (Sam Reily), Maleficent’s raven and confidante, overhears Phillip proposing to Aurora. When he has relayed this to Maleficent, she advises against the union, but Aurora insists she will be proven wrong.

I enjoyed Maleficent: Mistress of Evil and give kudos to Disney for their diverse employment. I especially like the message this movie sends regarding revenge, evil, gossip and faith. I think this is a good strong story and deserved more acknowledgment than it received.  The film received mixed reviews from critics, with criticism aimed at the “muddled plot and overly artificial visuals”, but praise for the performances of Jolie, Fanning and Pfeiffer. The review aggregator website Rotten Tomatoes reported the film holds an approval rating of 40% based on 246 reviews, with an average rating of 5.09/10. As of January 31, 2020, Maleficent: Mistress of Evil has grossed $113.9 million in the United States and Canada, and $377.8 million in other territories, for a worldwide total of $491.7 million. Check It Out!