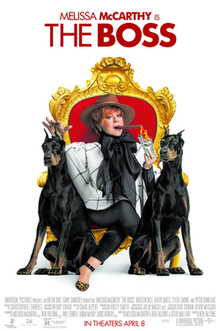 The Boss is not a particularly great movie but Melissa McCarthy made it the best it could possibly be.  Her character, Michelle Darnell grew up in an orphanage with children awaiting adoption, if they were lucky.  Michell was adopted twice but twice returned because she was not considered to be a good fit.  This reputation apparently followed her to adulthood.  Never having a family molded Michelle into a tough, no nonsense, sarcastic but successful business woman who struck it rich and who also became a motivational speaker.  Full of herself, popular and the 47th richest woman in the world, Michelle and her assistant Claire Rawlins (Kristen Bell) boards a helicopter after being confronted by her rival, Renault (Peter Dinklage) who tricks her into confessing that she was involved with insider trading.  Renault rats her out to the FBI and she goes to prison for 4 months, loosing everything she owned.  Ben Falcone (Melissa’s true life husband) directed The Boss and also makes a cameo appearance as her lawyer (Marty).  Kathy Bates plays an old friend and mentor (Ida Marquette) who Michelle screwed out of a deal.  After being released from prison, Michelle ends up living with Claire and her daughter Rachel (Ella Anderson).  Their journey begins when Michelle and Claire start a business while reinventing Michelle as America’s sweetheart.  Despite the spoilers, there’s many twist to The Boss.  You can’t imagine how much more there is to this story.  What The Boss is lacking is the smoothness and confidence I usually see in Melissa’s movies.  It seems as if they’re all trying much too hard.  There are many funny moments but the movie is a little too contrived.  All in all The Boss is funny enough to entertain you when you need that pick-me-up.  Peter Dinklage and Melissa are hilarious together.