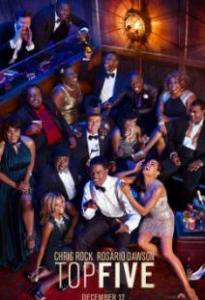 Has anyone noticed when Chris Rock makes a movie, he always seems to narrate as though it’s a documentary.  While I don’t see a problem with this, I just wonder why he does it that way.  I guess he can make more jokes and probably give the film a more humorous aura.  Having said that, I thought Top Five was pretty funny.  The story has a nice ring to it as well as an enormous cast of  comedians.  Expect to see Tracey Morgan, Sherri Shepherd, Adam Sandler, Kevin Hart, Cedric the Entertainer, J.B. Smoove,  Jerry Sienfeld and Whoopi Goldberg, to name a few.    However, the story centers around Chris Rock, who plays Andre Allen and Rosario Dawson, who plays Chelsea Brown, a reporter for the NY Times.  Despite Andre and Chelsea’s endless conversations, they manage to withhold secrets from each other that make Top Five a little suspenseful and interesting.  Gabrielle Union plays the ultimate reality diva in the throws of an up and coming wedding to Andre, who is simply trying to become a serious actor, but failing miserably.   There’s lots of sex and profanity in Top Five but it’s still funny enough to take you to the end without putting too much emphasis on the “x” rated scenes.  There are a couple of twist and surprises that make this movie worth seeing.  You can’t go wrong if it causes you a laugh or two.