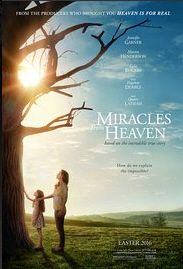 Get the Kleenex ready. Miracles from Heaven (MFH) will have you balling whether you want to or not. Brilliantly acted, “MFH”, based on a true story, is about a little 10 year old girl who gets sick with a mysterious disease no one seems able to properly diagnose. This faithful family of five seems to be doing everything right, so why are they targeted for this pain and suffering as though they were common street criminals? After seeing several doctors, their daughter, Anna Beam (Kylie Rogers) was finally diagnosed with a rare, fatal digestive disease. To make matters worse, the pain involved with this disease was so bad, 10 year old Anna said she would rather be dead than to live in this kind of pain. Determination and faith gave Christy Beam (Jennifer Gardner) the strength to go after the resources she needed to get the help she needed for her daughter’s survival. Christy traveled to Boston with Anna to see a specialist who had a reputation for curing the incurable but was impossible to get an appointment with.  There, they met and was befriended by Angela (Queen Latifah) who took them on a tour of Boston.  With no success, Christy gave up on her faith and began to journey into a darkness many of us find ourselves in when life doesn’t go our way.  Anger began to set in but Anna’s dad, Kevin Beam (Martin Henderson) stayed faithful.   After returning home from Boston, Anna was surly doomed to die when, on top of her tragic existence, she climbed an old cottonwood tree and fell headfirst into a three story hollow hole, that took the fire department more than 6 hours to strategically come up with a plan of rescue.  What happens next is a miracle but I will stop here.  Enough spoilers, see the movie for more.

Miracles from Heaven is an emotional faith based movie, based on a memoir written by Christy Beam about her 12 year old daughter, Anna.  I’m not sure why the script was changed to represent Anna as a 10 year old but in truth, she as 12.  The movie is well acted and whether you’re a believer or not, “MFH” has a profound message for all.  I for one, loved the movie and encourage everyone to see it.