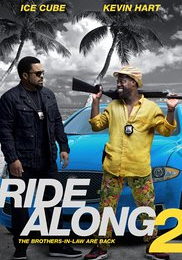 A semi-quasi slap stick comedy from Ice Cube and Kevin Hart, who play Detective James Payton and Officer Ben Barber, respectively .  I’m still not fond of slap stick however, Ride Along 2 was a little more tolerable than most.  I found it had a descent story line, although it was totally unbelievable on some level.  Today there are so many corrupt politicians, it’s hard to say what officials would or wouldn’t do.  I don’t have a lot to say about this movie that hasn’t been said already.  Most of it stayed the same as the first film, Ride Along.  Officer Barber is a new, rookie cop who is trying very hard to win Detective Payton’s favor and respect.  To make matters worse, Payton is also about to become Barber’s brother-in-law because Barber is marrying his sister, Angela Payton-Barber (Tika Sumpter).  James is not happy about this union since he’s considers Ben to be a total dork but goes along with most of his crap because of his sister.  Ride-Along-2 has James and Ben go to Miami to solve a crime that leads them to a corrupt war lord, Antonio Pope (Benjamin Bratt), his hacker A.J. (Ken Jeong) and his band of thugs and a love interest, Detective Maya Cruz, (Olivia Munn) for ice Cube.  The usual wreckage happens along with Miami Captain Hernandez (Carlos Gomez) asking that the two of them leave his town.

Ben, James and Olivia end up collaborating for the better good to solve the case.  Their tactics were interesting and entertaining.  Ride-Along-2 will reward it’s audience with a laugh or two without being too silly and stupid.  Waiting for Ride-Along 2 to release on DVD would probably be in your best interest.