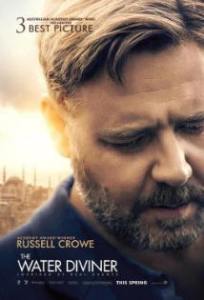 The Water Diviner, directed by Russell Crowe,  is an excellent movie.  I didn’t think I would like it, boy was I wrong.  The movie opens in 1919 right after WWI, with a farmer named Joshua Connor (Russell Crowe), using a diviner to find water on his property.  When he does, he digs and builds a rather sophisticated well.    Joshua has three sons, Arthur (Ryan Corr), Edward (James Fraser), and Henry (Ben O’Toole) who all served with the Australian and New Zealand Army Corps (ANZAC) at the Battle of Gallipoli five years prior to the opening scene of the movie and are now presumed dead. Joshua’s wife, Eliza (Jacqueline McKenzie), is unable to come to grips with their loss and blames Joshua for not going out and finding the boys.  Soon after, Eliza committed suicide by drowning. Joshua would have to lie to her priest so that she could be buried on consecrated ground.   At her burial, he decided he would bring his boys back and bury them beside her.

Joshua then commits himself to finding exactly what happened to the boys, to whom he had incredibly close relationships.  So he packed up and set out on a journey to Turkey where he meets Ayshe (Olga Kurylenko) and her son Orhan (Dylan Georgiades).  Ayshe is a widow who has not accepted her husband’s death but warms up to Joshua and tries to help him get to Gallipoli where his sons were killed.  There are some profound surprises on Joshua’s journey that make this movie worth every minute of your time watching it.  The Water Diviner will pull more emotions out of you than you ever expected.  Observing the audience around me, there was much laughter, tears and outburst.  Aside from Russell Crowe, a Turkish officer by the name of Major Hasan (Yılmaz Erdoğan) will steal away your heart.