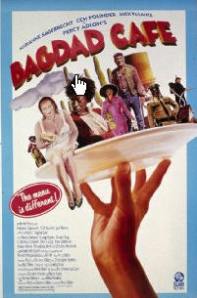 When this film first started, my first thoughts were to turn to something else because Bagdad Cafe was not what I thought it would be. The movie guide said it was about a large women who brings change to another women’s business.

For some reason, I stuck with the movie and was pleasantly surprised. I found myself laughing, crying, cheering, standing, sitting, jumping and even talking to myself. All of this equates to happiness. I felt happy by the time the movie ended and of course, I didn’t want Bagdad Cafe to end.

An unlikely German woman named Jasmin (played by Marianne Sägebrecht) appears at this cafe/motel out of no where. She has a suitcase of men’s clothes and no car. Her appearance raises the eyebrows of the owner, whose husband had just left her along with some of the permanent residents of the Cafe. Jack Palance, for one, is a painter/artist who finds Jasmin mesmerizing and wants desperately to paint a portrait of her. The owner (Brenda) has a son who plays classic piano that no one cares to hear until this woman, who later performs magic, comes along.

By the end of the movie, things are jumping, attitudes have disappeared, and the camaraderie among the cafe staff is unbelievable. This is truly a feel good movie that picks up long after it’s slow beginning. It took me to a place, in my heart, that was filled with emotion, song and dance. Bob Telson won an Oscar in 1989 for the best song (Calling You). The song was also mesmerizing and would win again in 2003 if it were up for an award. The owner, played by CCH Pounder, played the role of a lifetime. She should have gotten an award for her performance as well. There’s a lot to be learned at the Bagdad Cafe.