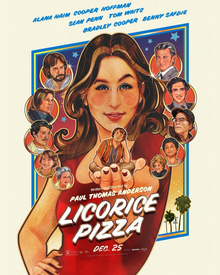 Licorice Pizza is a coming-of-age comedy-drama written and directed by Paul Thomas Anderson, who also serves as one of the film’s producers and cinematographers. The movie is about the journey between a child and an adult who have feelings for each other.  The only reason I watched Licorice Pizza is that it is Oscar-nominated.  I can’t write about movies I haven’t seen.

Licorice Pizza opens in the San Fernando Valley in 1973, 15-year-old child actor Gary Valentine (Cooper Hoffman) prepares for his high school picture day. He notices 25-year-old Alana Kane (Alana Haim), a photographer’s assistant, and strikes up a flirtatious conversation with her. She rebuffs his advances but meets him for dinner and they begin a friendship. Gary attends auditions and prepares for a press tour attached to a film starring Lucy Doolittle (Christine Ebersole). When Gary’s mother Anita (Mary Elizabeth Ellis) cannot take him to perform on the tour in New York, Alana chaperones him instead. On the plane, Alana meets Lance (Skyler Gisondo), one of Gary’s co-stars; they begin dating, but break up after an awkward, unforgivable dinner with Alana’s family.

Gary starts a successful waterbed company with Alana as an employee and assistant. While selling beds at an expo, he is falsely arrested on suspicion of murder and quickly released. Gary has a brief romance with a classmate, leaving Alana jealous. When Alana decides she wants to try acting, Gary’s agent Mary Grady (Harriet Sansom Harris) gets her an audition for a film starring Jack Holden (Sean Penn). After her audition, Alana accompanies Holden to a restaurant, which Gary and his friends are also patronizing. Macho film director Rex Blau (Tom Waits) convinces Holden, a motorcycle enthusiast, to recreate a stunt on a local golf course involving a jump over a fiery ramp. An inebriated Holden brings Alana along, but she topples off the bike; Gary runs to her to make sure that she is unhurt while Holden successfully performs the stunt.

Instead of Licorice Pizza, the film should have been called Gary and Alana’s Adventurous Growing Pains.  The story of Alana and Gary gets wilder and wilder.  A 25-year-old and a 15-year-old does not make for a serious love connection, nor is it film-worthy unless someone is going to jail.  Imagine your 15-year-old child in a relationship with a 25-year-old. She involves herself with all his silly, childish whims and he tries to act grown up.  Together they sweep the country getting into all kinds of crap but never admitting their feelings for each other.  With movies like Tick, Tick, Boom, and The Tragedy of Macbeth, this movie, getting a Best Picture nod is just mystifying.  Some stories are better left untold. Some people complained that they couldn’t find Licorice Pizza in the theaters or online, now I know why.  If you can find Licorice Pizza, don’t waste your time.  There’s no message, no meaning, and no legal or moral reason for making this movie.  The film generated some controversy around the ten-year age gap between the main characters as well as for its inclusion of two scenes in which the character Jerry uses a demeaning mock Asian accent when speaking to his Japanese wives. Regarding the latter, director Anderson defended the scenes as being contemporaneous and accurate portrayals of the movie’s time period. The group Media Action Network for Asian Americans, however, called for an awards boycott for the movie due to the decision to include these two scenes without any pushback from the characters. As of February 15, 2022, Licorice Pizza has grossed $14.4 million in the United States and Canada, and $9.7 million in other territories, for a worldwide total of $24.2 million.  On the review aggregator website Rotten Tomatoes, 91% of 254 critics’ reviews are positive, with an average rating of 8.4/10. The website’s consensus reads, “Licorice Pizza finds Paul Thomas Anderson shifting into a surprisingly comfortable gear – and getting potentially star-making performances out of his fresh-faced leads.”  Apparently, there are people who found the movie fun.  Licorice Pizza received four nominations at the 79th Golden Globe Awards, including Best Motion Picture – Musical or Comedy,  Check It Out if you dare!