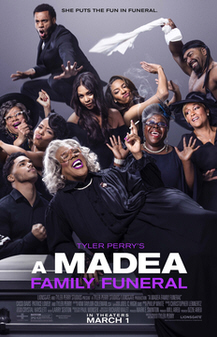 “Tyler Perry’s A Madea Family Funeral” is a comedy written, directed, and produced by Tyler Perry. It is the eleventh and final installment of the Madea film series. The movie follows a joyous family reunion that becomes a hilarious nightmare when Madea and the crew travel to backwoods Georgia, where they find themselves unexpectedly planning a funeral that might unveil some ugly family secrets. In my opinion, this is the worse movie Tyler Perry has ever made. I was actually sorry I went to see it.

Right from the onset of “A Madea Family Funeral”, the jokes started flying, the problem is the jokes were not that funny. I felt the plot was downright ridiculous and unrealistic, plus Mabel “Madea” Simmons (Tyler Perry), used old theatrics e.g., using his male voice and asides that worked well in the Madea plays, to deliver hilarious lines but didn’t work on the big screen. Anthony (Derek Morgan) died while having sex with his mistress (Tiffany Black) who happens to be a good friend of Anthony’s family. The team, Madea, Aunt Bam (Cassi Davis) and Hattie (Patrice Lovely), tried to withhold this devastating secret from Vianne (Jen Harper), Anthony’s wife, which made for a failing hush-hush operation. Any normal person would have noticed the whole presentation was bogus but for the comedy to work, Vianne missed the entire point, making the premise of the film a downtrodden disaster.

AJ (Courtney Burrell) seemed to be the focus of the film. He is the son of Anthony and Vianne, the brother of Silvia (Ciera Payton), Jesse (Rome Flynn) and the husband of Carol (KJ Smith), who he not only cheated on but abused verbally. BTW, the woman AJ cheated with is his brother’s fiancé, Gia (Aeriél Miranda). The remainder of the story is so ridiculous, I am at a loss for words. For some reason, Tyler introduced a new character into the mix with no legs named Heathrow who cannot talk without a device pressed to his throat.  This is supposed to be Tyler Perry’s last Madea movie. I’m not sure with the kind of money Madea pulls in ($27M opening weekend box office) that this is really going to be the end but according to Rotten Tomatoes (1), it should be! As much as I’ve always loved Tyler Perry and his beloved character, Madea, I have to warn you not to waste your time or money on this one, it’s really bad! Don’t Check It Out!