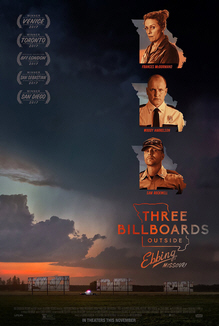 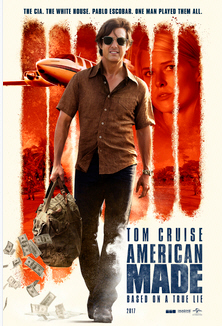 American Made is based on a true story, which was hard to believe but given the state of America at this time, anything is possible.  The film is a biographical crime film directed by Doug Liman and written by Gary Spinelli about a former TWA pilot who became a drug smuggler for the Medellín Cartel in the 1980s then in order to avoid jail time, approached United States government officials about serving as an informant for the DEA.  American Made is one of the craziest stories told.  If this tall tale actually happened, America is more unstable than I ever thought.  American Made is definitely over the top crazy but very entertaining.

In the late 1970s, Barry Seal (Tom Cruise), a pilot for TWA, a commercial airline,  is contacted by CIA case officer, Monty Schafer (Domhnall Gleeson)  and asked to fly clandestine reconnaissance missions for the CIA over Central America using a small plane with cameras installed.  Soon after the operation was started, Schafer asks Seal to also start acting as a courier between the CIA and General Noriega in Panama.  During a mission, the Medellín Cartel approaches Seal with another proposal to fly cocaine on his return flights to the USA. Seal accepts and starts flying the cartel’s cocaine to Louisiana. The CIA turns a blind eye to the drug smuggling, but the DEA tracks Seal down. To avoid the authorities, Schafer moves Seal and his family to a remote town in Arkansas called Mena where he is asked to run guns to the Nicaraguan Contras based in Honduras, Central America. Seal soon realizes that the Contras are not serious about the war and starts trading the guns to the cartel instead. The CIA set up a Contra training base in Mena and Seal flies the Contras in, but most of them escape soon after they arrive.

If you think this plot sounds crazy, things get even crazier when Seal’s wife Lucy’s (Sarah Wright) freeloading brother JB (Caleb Landry Jones) moves in, needing a job from Seal. Eventually, he starts stealing money from the Seals and is caught by the town’s Sheriff Downing (Jesse Plemons) with a briefcase full of laundered cash and is arrested. Seal gives him money and a plane ticket to Bora Bora so he can leave but JB demands weekly cash and insults Lucy. Seal tries to chase him but JB’s car explodes; it’s implied Jorge Ochoa (Alejandro Edda), a drug lord and member of the cartel,  had JB’s car rigged with explosives, killing him so that he wouldn’t snitch.

Eventually, the CIA shuts the program down and abandons Seal to be arrested by the FBI, DEA and other law enforcement agencies. Seal escapes prosecution by making a deal with the White House, which wants evidence the Sandinistas are drug traffickers.

Believe it or not, this story gets even wilder which is hard to believe.  If truly based on a true story, we should probably be more frightened than anything else because it’s our tax payers money that funds operations like this.  Tom Cruise did a fantastic job playing Barry Seal — American Made was more entertaining than anything else, as I really found it hard to believe.  It was fun to watch.

I went to see “Get Out” thinking it was going to be a horrible horror flick focused on race, the rich and immortality.  I’m so glad I did go to see the movie instead of forming an incorrect opinion.  Jordan Peele wrote a very creative story that borders on science fiction, dark comedy and horror.  The surprises are multiple and starts when a deer ends up flying across the road after being hit.  The story is filled with a bunch of rich, sinister people who are hard to figure out, so don’t look to solve “Get Out” easily. I particularly liked that this film didn’t go for cheap thrills using extremely loud sounds and surprise pop-up appearances, like a lot of other horror flicks.

TSA Officer Rodney “Rod” Williams (Lil Rel Howery), was just tasked with dog sitting for his best friend, a Brooklyn-based photographer, Chris Washington (Daniel Kaluuya).  Chris and his girlfriend, Rose Armitage (Allison Williams) are preparing for a long weekend drive to meet her parents, Dean (Bradley Whitford) and Missy Armitage (Catherine Keener). Chris is apprehensive because Rose has yet to reveal to her parents that her fairly new boyfriend of 5 months is African American.

As Chris and Rose arrive at the Armitage estate, they pass an African American groundskeeper, Walter (Marcus Henderson). Rose’s parents welcome Chris with big hardy smiles and hugs.  Dean proudly offers to give Chris a tour of the house, at which time they encounter their maid, Georgina (Betty Gabriel), who is also African American. While the family sits with Chris for a friendly get-to-know you-better-chat, Missy innocently queries Chris for personal information and finds out that his mother died in a hit-and-run accident when he was eleven years old. They also discuss Chris’ smoking habit, and Missy, a psychiatrist, offers to help him overcome his addiction through hypnosis, which Chris declines. At that time, Rose’s brother Jeremy (Caleb Landry Jones) arrives and they all sit down for dinner.

That night, when Chris goes out into the backyard to smoke a cigarette, he observes strange behavior from Walter and Georgina. When he re-enters the house, Missy brings up Chris’ smoking habit and invites him to sit down with her. She again offers to hypnotize him before asking him about the night his mother died. Chris reveals his guilt for not calling 911 as soon as he realized his mother hadn’t come home, and that he instead sat watching television. He finds himself unable to move or stop talking about his mother,  realizing he is being hypnotized. Missy commands him to sink into the floor, and he falls in an endless void while looking at Missy through a large screen; Missy tells him that he is now in “the sunken place”.  Chris suddenly wakes up and believes that the encounter with Missy was just a nightmare; however, after a conversation with Walter, he realizes that the encounter was real and that he had been hypnotized because he no longer wants to smoke, not remembering anything else.

From this point on, the film takes on a more sinister approach.  Get Out is different and leaves us wondering if such things really go on.  Without revealing any more of the story, I urge you to see this really good horror movie for the answers to what’s going on with this family.  BTW: the family is having an annual weekend party with many other friends who will bring more drama and questions to the game.  I thoroughly enjoyed Get Out and highly recommend it to everyone.

[Get Out is nominated for BEST: Picture, Actor, Director and Original Screenplay]