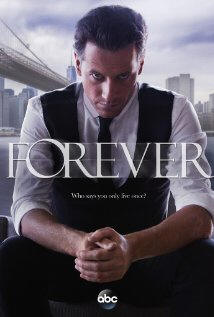 I really like this new series.  I’ve watched 2 episodes so far and I find myself quite intrigued.  The series opens with an explanation as to the condition of Dr. Henry Morgan played by Ioan Gruffudd.  200 years ago,  Dr. Morgan was employed on an African slave trade ship where he was asked to execute a black man for being sick.  Since the man was not really sick, he refused to execute him.  The captain of the ship raised his sword to execute Dr. Morgan but something unexplainable happened and Dr. Morgan woke up in a near by river with no clothes on, alive and well.  Unbeknownst to him, at that time, he would never die.  In the meanwhile he meets a beautiful woman named Abigail, played by Mackenzie Mauzy, whom he wedded and told his secret to.  It was during world war II when they found an orphaned baby in a German camp and raised him as their own.  At present Dr. Morgan is still 35 years old and his wife Abigail has passed.  It hasn’t been revealed how and why she died, but their child Abe, played by Judd Hirsch is now in his 60s and retrieves Dr. Morgan from the river every time he dies.  Currently, Dr. Morgan is a NY Chief Medical Examiner and is sharper than anyone he works with.  He has befriended a female detective named Jo Martinez, played by Alana De La Garza who he now helps with solving her police cases.  She doesn’t know his secret but is impressed by his keen observation skills.  Someone named Adam is claiming to be in the same dilemma as Dr. Morgan, but instead of 200 years, Adam is claiming 2,000 years and is calling Henry constantly with tidbits about his life.  There’s a lot to this plot — I hope Forever sticks around for a while, as I find it very entertaining and quite the thrill ride.  Forever airs on ABC.

[Despite fan and cast protest, FOREVER has been cancelled. I am truly sorry to see this series go.]