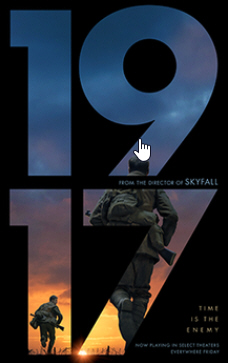 1917 is an epic war film directed, co-written and produced by Sam Mendes. It is based in part on an account told to Mendes by his paternal grandfather, Alfred Mendes, and chronicles the story of two young British soldiers during World War I who are given a mission to deliver a message. This warns of an ambush during a skirmish, soon after the German retreat to the Hindenburg Line during Operation Alberich in 1917.  The movie is well told and brilliantly acted.

During the First World War in April 1917, the Germans have pulled back from a sector of the Western Front in northern France. General Erinmore (Colin Firth) briefs two young British soldiers, Lance Corporal Tom Blake (Dean-Charles Chapman) and Lance Corporal Will Schofield (George MacKay). Aerial intelligence has learned that the Germans are not in headlong retreat but have made a tactical withdrawal to their new Hindenburg Line, where they have prepared to overwhelm attacking British with their artillery. With field telephone lines cut, Blake and Schofield are ordered to hand-deliver a message to the 2nd Battalion of the Devonshire Regiment, calling off their planned attack, which might cost the lives of 1,600 men.  Any reluctance to make the journey was suppressed because Blake’s brother, Lieutenant Joseph Blake (Richard Madden) is among the 1,600.

Schofield and Blake cross no man’s land and reach the original German trenches, now abandoned. The trenches turn out to contain tripwires, which was triggered by a rat. The ensuing explosion almost kills Schofield, but Blake digs him out and leads him out of the collapsing bunkers. They arrive at an abandoned farmhouse, where they witness a dogfight nearby. A German plane plunges into the farm and Schofield and Blake attempt to save the burned pilot. Schofield proposes they mercy kill him, but Blake has Schofield instead fetch water for the pilot to drink, which turns out to be a big mistake.  See 1917 to find out how this all turns out.

1917 is an extraordinary tale of Lance Corporal Will Schofield and Lance Corporal Tom Blake who are given a semi-quasi suicide mission to deliver a message that will save 1,600 soldiers from walking into a death trap, set by the Germans.  Their journey was unbelievably dangerous and stressful.  Their passion and motivation were astounding.  It was hard to watch what they had to go through and the kinds of danger they encountered along the way.  One of 1917’s claim-to-fame is cinematographer Roger Deakins’ use of long takes to have the entire film appear as one continuous shot. I can’t say too much because I don’t want to spoil the movie for whoever may see it.  I can say 1917 was worth all the nominations it received.  The cinematography was outstanding, as was the scenery that showed the horrible filth. dead bodies, bob wires and booby traps in all its vivid color.  I wasn’t sure they received enough accolades for all their achievements but I’m unsure anyone really knew what they encountered along the way until now.  At any rate, 1917 was a brilliant movie and was praised by critics for Mendes’s direction, the performances, cinematography, musical score, sound effects and realism. At the 77th Golden Globe Awards, the film won for Best Motion Picture – Drama and Best Director.  At the 73rd British Academy Film Awards 1917 received nine nominations. 1917 domestic gross is $54,616,984  and $78,416,984 Worldwide.  Check It Out!